Tributes paid to prisons inspector Michael Reilly on his death 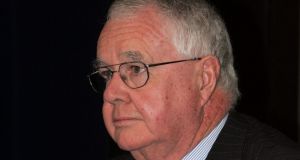 Tributes have been paid to the Inspector of Prisons Mr Justice Michael Reilly who died early on Saturday.

Tánaiste and Minister for Justice and Equality Frances Fitzgerald expressed her sympathies to his family, saying: “Michael Reilly served the State with great commitment as Inspector of Prisons, a role he agreed to take on after a distinguished career on the bench as a judge in both the District and Special Criminal Court.

“He was robust and fair-minded in the way he carried out his work as Inspector of Prisons; he was not afraid to criticise where this was merited, but he retained the respect of everyone involved in penal policy throughout his tenure as Inspector,” the Minister said.

“Judge Reilly was determined that his work would make a difference, and it did. I worked very closely with Judge Reilly and I found him to be a very warm genuine, caring person with a deep interest and commitment to the work he was carrying out so diligently and so carefully.”

He was serving as the Inspector of Prisons when he died, a position he had held since January 2008.

“ Judge Reilly’s reports and recommendations have been the catalyst for many changes in the Irish Prison Service and his contribution to prison reform has been hugely significant.

“On my own behalf and on behalf of the Irish Prison Service I would like to extend deepest sympathies to his family for their loss”, he said.

In a speech at NUI Galway in 2014, Mr Justice Reilly set out his approach to justice within prisons.

“Prisoners forfeit their rights to freedom. That is all they forfeit. They are entitled to all the other rights and privileges that you and I enjoy,” he said.

On the same occasion, he criticised “salacious” and “self-serving” media commentary about prison conditions.

He said that when he took up his post in 2008 conditions at Mountjoy Prison were “beyond description” with slopping out taking place in single cells used by up to four people.

“I campaigned for the installation of toilets and to have the cells returned to single occupancy. Now all cells in Mountjoy Prison have in-cell sanitation and all have wash-hand basins,” he said.

“The dignity of prisoners is respected in that these facilities are screened off.”