Trevor Deely search to continue amid hopes of a breakthrough 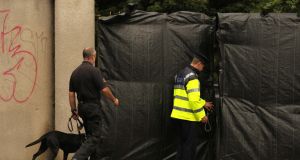 The scene of the search for the body of Trevor Deely in Chapelizod, Co Dublin. Photograph: Stephen Collins/Collins Photos

Heavy earth-lifting machinery is due to be moved on to the Dublin site where gardaí are searching for Trevor Deely’s remains.

The machinery will assist in the thorough clearance of part of the site so that soil in that section can be more closely examined.

A gun discovered at the site last week has still not been linked to Mr Deely and Garda sources said they had no information to suggest the firearm was linked to the missing person’s case.

The search is now at a critical phase with both intense media reporting and the discovery of the firearm raising hopes of a breakthrough.

One senior Garda source stressed that while the search in Chapelizod, west Dublin, was being carried out to test the veracity of intelligence received in recent months, that information was not yet proven.

A criminal source has told gardaí that Mr Deely was shot dead in a chance encounter on the street with a criminal in the early hours of December 8th, 2000.

The 22-year-old Bank of Ireland worker was returning home from a Christmas party in the early hours of the morning in question.

He was recorded on CCTV walking from Baggot Street bridge to Haddington Road shortly after 4am and nothing has been heard of him since.

In April, gardaí released CCTV images that had been enhanced with technology not available at the time Mr Deely disappeared.

A man can be seen in the images conversing with Mr Deely. The images also show a man, possibly the same person, potentially following Mr Deely on the street.

The information that gardaí has since obtained represents the first solid lead in the 16½ years since Mr Deely vanished.

However, Garda officers believe some of the media coverage has raised expectations that may not be met.

The same senior sources say it would be impossible to link the gun with Mr Deely’s disappearance unless his remains were found.

They also point to more recent cases, including that of Elaine O’Hara, where a cause of death could not be established even when remains were found.

At the site in Chapelizod – a heavily wooded spot on the banks of the River Liffey – gardaí are prepared to continue the search for several more weeks if required.