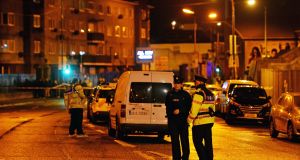 Gary Hutch (34) is shot dead pool-side at an apartment block near Marbella after a life of crime. The killing is believed to have been carried out by the Spain-based drugs gang led by Christy Kinahan. Hutch was a suspect for the murder of Derek Duffy in Finglas in September, 2007.

Crumlin man David Byrne (34) is shot dead and two of his associates are wounded at a boxing weigh-in at the Regency Hotel in Drumcondra, north Dublin. A number of men linked to Christy Kinahan, including his son Daniel Kinahan, had gathered at the hotel for the weigh-in when it was attacked by a six-strong gang. Three of the five gunmen dressed in mock-up combat style Garda rapid response unit uniforms and carried AK47s.

Minister for Justice Frances Fitzgerald condemns the shootings at the Regency Hotel as “vile, audacious and highly sinister”. Taoiseach Enda Kenny calls on Sinn Féin leader Gerry Adams to make a statement on media reports that AK-47s used in the attack may have come from Provisional IRA.

The Continuity IRA claims responsibility for Friday’s shooting in a statement to the BBC. It says David Byrne was targeted because of his involvement in the killing of Alan Ryan in Dublin four years ago. The group says the attack was “not an isolated incident” and warns of future attacks.

Gerry Adams responds to the Continuity IRA statement saying the group “are not the IRA. The IRA are gone and their weapons are gone. Enda Kenny knows that”. He adds that he and other Sinn Féin members have received death threats from the same group.

Later on Monday, another group claiming to be the Continuity IRA issues a statement saying it did not have any involvement in the Regency Hotel shooting. It says it views the claim to the BBC “as another attempt to tarnish the name of the organisation”.

Eddie Hutch snr is shot dead after four men burst into his home on Poplar Row in Dublin’s north inner city. Hutch is wounded several times and dies immediately. His death marks the second member of the Hutch family to be shot dead in less than six months. He becomes the latest victim of a feud between a gang loyal to murdered criminal Gary Hutch and one led by international drugs trafficker Christy Kinahan.

Gardaí discover car close to the crime scene shortly after the shooting which they believe may have been used by the killers. A number of balaclavas, a can of petrol and other items are found the in the silver BMW which was abandoned at St Patrick’s Parade in Drumcondra.

Frances Fitzgerald urges members of the gangs to present themselves to the Garda if they fear for their safety.

The Minister for Justice to meet Garda Commissioner Noirín O’Sullivan amid concerns of escalating gun violence.