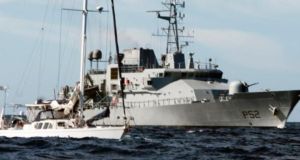 The detained yacht Makayabella with up to €80 million worth of cocaine aboard, off the Cork coast 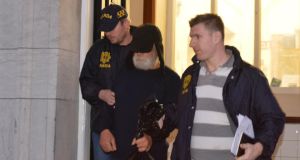 Skipper of the yacht (centre) from which €80 million worth of cocaine was seized by the Irish Navy being brought to Cork District Court. Photograph: Michael Mac Sweeney/Provision 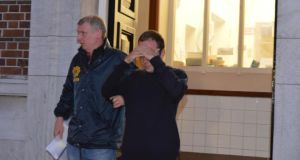 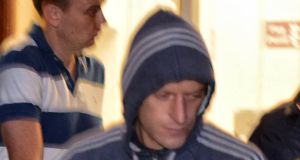 Three men have been remanded in custody after they were charged last night in connection with the seizure of €80 million worth of cocaine aboard a yacht detained by the Irish Naval Service off the Irish coast earlier this week.

Britons, John Powell (70), Benjamin Mellor (35) and Thomas Britteon (28) were each charged with a single offence relating to the seizure of the tonne of cocaine by the Joint Task Force on Drug Interdiction in the early hours of Tuesday morning.

Each of the accused was charged with possessing cocaine on board the yacht, Makayabella some 217 nautical miles off the coast of Ireland on September 23rd with intent to import the drug contrary to Irish legislation or the laws of any other state.

Last night, at a special sitting of Cork District Court, gardaí gave evidence of arrest, charge and caution in respect of each of the three men who were brought to the courthouse on Anglesea Street amid tight security.

Det Garda Jerome Twomey of the Garda National Drugs Unit gave evidence of arrest, charge and caution in relation to Mr Powell of Airedale Mews, Silsden, West Yorkshire and told the court that he replied, ‘that’s all clear’ after the charge was put to him after caution.

Det Garda Tony Holmes of the Cork City Divisional Drugs Unit gave evidence of arrest, charge and caution in relation to Mr Britteon of Convamore Road, Grimsby, Lincolnshire and told the court that he replied, ‘I’m very sorry for what I’ve done’ when he was charged.

Det Garda Liam Brennan of the Garda National Drugs Unit gave evidence of arrest, charge and caution in relation to Mr Mellor of Mornington Villas, Manningham, Bradford and told the court that he made no reply when the charge was to him after caution.

Det Insp Declan O’Sullivan said that gardaí were seeking a remand in custody for all three to appear by video link at Cork District Court next Thursday for the DPP’s directions and defence solicitors, Frank Buttimer and Shane Collins Daly said their clients had no objection to the application.

Judge Olann Kelleher granted all three free legal aid after gardai said they had no issue with their statements of means.

Judge Kelleher remanded the men in custody to appear again at Cork District Court on October 2nd. They were escorted from court by gardai including armed members of the Regional Support Unit.

Separately in the UK, NCA investigators last night charged Stephen Powell (47) of Netherfield Road, Guiseley, Leeds, with conspiracy to import cocaine. He will appearl at Leeds Magistrates Court this morning.