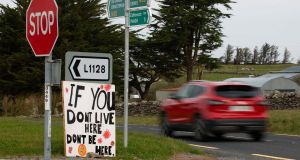 Elsewhere in Clare, a larger but less threatening placard appeared on the main Ennis to Lahinch road near Ennistymon. It states: ‘If you don’t live here – Don’t bee here.’ Photograph: Press 22

Gardaí are investigating the source of threatening posters that were apparently displayed at different locations in a popular West Clare resort town.

The A4 printed pages were posted at various locations in Kilkee including outside mobile home parks and holiday homes. It has also been claimed that the posters were dropped in the letter boxes of local holiday homes in the town.

The posters told holiday home owners to “f**k off” or they might have no holiday homes to return to when the Covid-19 crisis is over.

The page, headed ‘Kilkee Residents Health Defence’, stated: “Holiday home owners. Stay at home does not mean your holiday pad. We would like you to return to your home. Do the right thing, F**k out of Kilkee NOW! If you do not leave, when the crisis is over, you may not have a holiday home to return to this summer.”

Kilkee Chamber of Commerce has said it “utterly condemns such nonsensical, counter productive and criminal behaviour”.

A spokesman said: “We urge anyone who has received this letter or has any other information about this to contact the gardaí immediately and we would ask anyone with CCTV cameras to have a look and see if they have footage of this being posted.”

The posters were “not indicative of the attitude of the overwhelming majority of people in Kilkee,” the chamber said.

“This is the action of one or two idiotic and attention seeking individuals. We urge everyone to stay safe, follow the official advice from the HSE and An Garda Síochána and we look forward to welcoming you all back to Kilkee once this crisis is over.”

“I haven’t seen a physical copy of this so can only go on what people are telling me. This is shocking and not reflective of the majority of people here in Kilkee. I’ve been told they were also dropped in some letterboxes and I would ask those people to take them to the Garda station and make a formal complaint.”

Concerns had been expressed earlier in the week when it was reported that a large number of holiday home owners had begun to arrive in the town.

Mr Murphy stated: “People with second homes in the west of Ireland are extremely fortunate in life, much more fortunate then many and people living in the communities where they have the homes. I am calling on them to respect the areas who have welcomed them over the years by staying away this Easter. It is time to show some appreciation for the privilege you have in life and repent the health of the people who live permanently on the coast.”

Gardaí in Kilrush are investigating the incident and have asked anyone with information to contact them.

Elsewhere in Clare, a larger but less threatening placard appeared on the main Ennis to Lahinch road near Ennistymon. It states: “If you don’t live here – Don’t be here.”