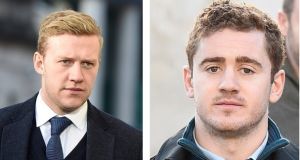 Ireland and Ulster rugby player Stuart Olding, who is accused of raping a Belfast student, told police he had no recollection of her saying “no, please no, not him too” when he entered a bedroom in Paddy Jackson’s house during a party.

Mr Olding and his teammate Mr Jackson are accused of raping the woman in Mr Jackson’s bedroom during a house-party two years ago.

On Tuesday morning at Laganside Crown Court a jury of eight men and three women continued hearing recordings of Mr Olding’s police interviews. One male juror was discharged due to illness.

During a interview on June 30th, 2016, two days after the alleged rape, Mr Olding said he had never met or seen the complainant before that night. He earlier said he had walked into Mr Jackson’s bedroom to see her straddling and kissing Mr Jackson.

He told police the woman invited him over by holding her hand out and then performed oral sex on him for five minutes before he left the room and went to sleep elsewhere.

“Paddy Jackson was sitting on the bed just watching her give me oral sex,” Mr Olding said.

Mr Olding told a detective constable he had no recollection of the woman saying “no, please no, not him too” when he entered the bedroom.

Last month the woman told the court she “ looked Patrick Jackson straight in the eyes and said ‘please no, not him as well.’”

The detective put it to Mr Olding, the woman said Mr Jackson was raping her from behind when he entered the room. He denied this and repeated she was straddling Mr Jackson and kissing him.

He said he did not have sexual intercourse with the woman and he did not see Mr Jackson having sex with her either.

Mr Olding told police he could not recall seeing Mr Ilroy enter the room with his penis in his hand. He also had no recollection of Mr McIlroy thrusting his penis at her and saying: “You fucked these guys. why not me?”

The detective asked Mr Olding if he and Mr Jackson discussed the incident the next day.

“We pretty much just talked about it, what happened,” Mr Olding replied. “We were hungover, we were drunk when it happened.”

Mr McIlroy and Mr Harrison also asked them what happened and they replied “oral sex”, he told police. There was no further discussion of the encounter.

At the conclusion of the interview Mr Olding’s solicitor told police: “You can take it from his attitude that he categorically denies any involvement in these allegations.”

At the outset, his solicitor told police Mr Olding’s recollection had not got any clearer since the first interviews and on that occasion he had gone into as much detail as he could. The solicitor said his client “wouldn’t be saying much.”

Over the course of four interviews police read Mr Olding witness statements from the other party guests and the taxi driver who picked up the complainant from Mr Jackson’s house.

The trial continues on Tuesday afternoon before Judge Patricia Smyth.