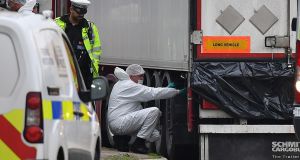 The Government is set to introduce harsh new punishments for human traffickers who endanger the lives of illegal immigrants.

The proposed legislation, the Smuggling of Persons Bill, will retain the current maximum 10-year sentence for facilitating the unlawful “entry into, or presence in, the State of a person who is not an Irish citizen”.

However, under the law judges will be obliged to impose tougher sentences on people smugglers who endanger the life or safety of migrants or whose “actions result in the exploitation or inhuman or degrading treatment” of victims.

Ireland already has some of the strictest punishments for human trafficking in the European Union. The maximum sentence in most other EU countries is significantly less. In the UK, the maximum is 14 years.

The general scheme of the Bill has already been published and it is currently with the parliamentary draftsman. It is expected to be published by Easter this year, according to the Department of Justice.

The Bill is not a reaction to the people-smuggling operation in the UK which involved four Irish men and led to the deaths of 39 Vietnamese men, women and children.

Rather it is designed to bring Ireland in line with an EU directive, which calls for a minimum eight-year sentence for traffickers who endanger human lives. It will also allow Ireland to ratify the United Nations protocol against the smuggling of migrants.

Minister for Justice Helen McEntee said that, while the State already had strong legislation on human smuggling, “there is no doubt that such crimes can be difficult to prosecute given their international reach and the fact that their execution can span different jurisdictions”.

“We want to be sure we have every tool available to combat human smuggling and this legislation will strengthen the measures available in this jurisdiction for doing so,” she added.

Recently Europol warned that the pandemic was likely to significantly alter human-trafficking patterns in Europe. The economic impact of the pandemic on the developing world may trigger another wave of mass migration to the EU, it said.

Tackling migrant smuggling has not been a priority for gardaí in recent years. Prosecutions are rare and the most recent Garda policing plan mentions it only once, in the context of Garda staffing.

Recently retired assistant Garda commissioner Pat Leahy said it was difficult to assess how big the problem is in Ireland.

“[People smuggling] is a worldwide phenomenon and it has infiltrated the Irish market. We obviously know that now,” he said.

“During my time in the capital it wasn’t prevalent. But it is an issue for the future, definitely. It’s huge money.”