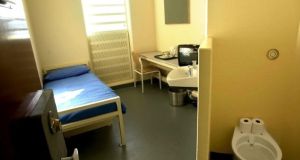 Portlaoise Prison’s A block houses some of the country’s most dangerous murderers and gangland figures, including several members of the Kinahan crime faction. Photograph: Bryan O’Brien

Inmates in the State’s highest security prison unit have almost no social interaction with each other and little to do to pass the time, according to an internal report.

Portlaoise Prison’s A block houses some of the country’s most dangerous murderers and gangland figures, including several members of the Kinahan crime faction.

One of the most recent additions to A block is Frederick “Fat Freddy” Thompson, a major gangland figure who was jailed for life last year for the murder of David Douglas.

Mr Thompson is currently suing the State over what he claims is the “extremely oppressive” and the “severe” regime he is being subjected to at Portlaoise Prison.

He claims that in breach of his human rights he is only allowed contact with two other prisoners, and spends most of his time effectively on “lock-up” in his cell. He also claims that he is being denied regular exercise, fresh air and appropriate education.

According to an internal report by Portlaoise’s interim chaplain, there is a “feeling of isolation and hopelessness for the men on A block.”

The chaplain, who is an Irish Prison Service employee, said “the segregation aspect of A Block makes social interaction of any reasonable kind almost impossible”.

There are no workshops attached to the block and only limited access to educational activities, the report states. This makes it “extremely difficult for men to shake off the everyday monotony of the landing and all the anxiety this brings,” he said.

“I am constantly in contact with some families of the men on A block and they also regularly express concern for the physical and mental wellbeing of their loved ones from an isolation point of view.”

Families can only visit prisoners on A block though a screen for security purposes “which does nothing to promote family interaction or family support, in fact they do the opposite,” the chaplain wrote.

He said the use of screened visits should be reduced to incentivise positive behaviour. He also suggested turning the “huge rough green area surrounding A Block” into a recreational garden for inmates.

Sometimes prisoner access to training and education must be limited “in order to provide safe and secure custody, and maintain the good order of our prisons,” he said.

A block has been the subject of numerous criticisms in the past. In 2016, a Prison Visiting Committee noted the lack of services for prisoners and reported that there is no natural air flow in the building, making it unhealthy for both prisoners and staff.

In May 2018, 15 prison officers assigned to A block walked off the job following the assault of an officer by an inmate.

A separate internal report compiled by the chaplain in the Dochas Centre women’s prison complained that one pair of underwear is expected to last someone on committal for a week or more.

There are sometimes not enough sanitary products available for female prisoners “so they have to go without”, the chaplain said. “I feel this is a serious issue that needs to be addressed.”