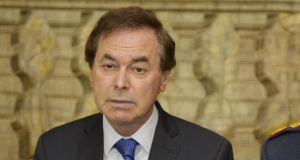 Minister for Justice Alan Shatter: says there is “great difficulty” in determining the extent to which prostitution in Ireland was engaged in voluntarily between consenting adults. Photograph: Alan Betson

Minister for Justice Alan Shatter has asked for advice from the Attorney General and the Minister for Health on a proposal to criminalise the purchase of sexual services.

Mr Shatter is seeking his colleagues’ opinions on a report by the Oireachtas Committee on Justice, Defence and Equality, which recommends that the prostitution laws be changed so as to make it a summary offence to buy sexual services. The committee has also recommended that requesting or attempting to pay for sex should also be made an offence, but says it should be clarified in law that the prostitute selling sex would not be committing an offence.

In correspondence between Mr Shatter and the committee, published yesterday, Mr Shatter raised a number of concerns about the proposals and asked for further queries to be addressed.

He referred to the “great difficulty” in determining with any certainty the extent to which prostitution in Ireland was engaged in voluntarily between consenting adults and the extent to which coercion was involved. He noted “sharp divergences” on this point in evidence given to the committee.

In the letter, dated October 2nd, Mr Shatter wrote that despite the “wide spectrum in terms of the nature of prostitution in Ireland”, ranging from human trafficking to the purchase or sale of sexual services between fully consenting adults, the committee “appears to be recommending a broadly applicable and indiscriminate offence”.

He added: “My concern is that, as legislators, we have to be careful not to overreach in terms of criminalising human conduct.

“In establishing criminal offences, legislators must be mindful of the legal and constitutional rights of both victims and offenders.”

Mr Shatter said that, in light of the knowledge deficit about prostitution in Ireland, the “apparent blanket ban” on the purchase of sexual services, as proposed by the committee, raised issues about proportionality. He said a “Swedish-style offence”, meaning the criminalisation of the purchase of sex, would represent a “fundamental departure” from the principles underpinning the existing offence of solicitation in the Criminal Law (Sexual Offences) Act 1993.

“This is a gender-neutral offence and criminalises all parties to the transaction, ie, the buyer, the seller and any third-party involved (a pimp, for example). In addition, the penalty structure distinguishes between first and subsequent offences.”