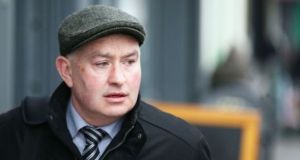 Patrick Quirke (50), of Breanshamore, Co Tipperary, had pleaded not guilty to the murder of Bobby Ryan, a part-time DJ going by the name Mr Moonlight. Photograph: Collins Courts

The jury in the Patrick Quirke trial did not hear evidence that the accused had secret audio recordings of him being “intimate” with his former girlfriend Mary Lowry and that his computer was used to look up articles on notorious Irish murderers including Joe O’Reilly.

The recordings were ruled as inadmissible because his defence team argued they would suggest to the jury that he had “strange sexual proclivities” and could prejudice them against him. Ms Justice Eileen Creedon agreed, saying that the potential to prejudice the jury outweighed their value as evidence in the trial.

Ms Lowry told gardaí that she did not give permission to be recorded and was “disgusted” when gardaí played the audio to her.

It was one of several audio recordings found on Quirke’s computer following a search of his home in May 2013.

Ms Lowry helped gardaí identify the voices on the recordings and said at least one was a conversation between Quirke and his wife Imelda.

Two recordings were of Quirke and Ms Lowry and on others it was not possible to identify anyone. Only one recording was played to the jury, that of a conversation between Ms Lowry and her boyfriend Flor Canitllon, whom she met almost a year after Bobby Ryan went missing.

No explanation was given as to how Quirke had those recordings on an external drive and both Mr Cantillon and Ms Lowry said they did not give their permission.

Forensic IT examiner Detective Garda Paul Fitzpatrick said a Nokia mobile phone was the most likely device used to record.

The defence team did not want the jury to hear any of the recordings, including that with Mr Cantillon, because they said it would lead the jury to speculate as to how those files ended up on Quirke’s computer.

Prosecution counsel Michael Bowman SC fought hard to have them included, telling Ms Justice Creedon that they were “not scandalous, but intimate”.

The recording with Mr Cantillon, he said, showed that Quirke still wanted to be in a relationship with Ms Lowry and was infatuated with her.

Ms Justice Creedon decided that only the conversation with Mr Cantillon was to be played to the jury.

The jury also did not find out that Quirke’s computer had been used to search for notorious Irish wife murderer O’Reilly.

A blog article written by an Irish crime journalist, titled “How Joe O’Reilly thought he had committed the perfect murder,” was among the pages visited.

O’Reilly murdered his wife Rachel Callaly at their home in Naul, north Dublin in October 2004 and was convicted after mobile phone evidence showed he was not where he claimed to be when the murder took place.

Det Gda Fitzpatrick also found evidence that Quirke was looking up articles on Siobhán Kearney, who was murdered by her husband Brian in February 2006, and Jo Jo Dullard, who went missing in 1995.

Gardaí believe that Quirke was looking for information on how to get away with murder and the potential traps that could catch a murderer out. This tied in with other articles Quirke had viewed such as “The limits of DNA Evidence” and multiple articles on the decomposition of bodies.

Ms Justice Creedon ruled the evidence as inadmissible, saying that the searches were relevant but she was concerned that those murders were “notorious” and therefore the fact of the searches would be prejudicial to Quirke but not sufficiently probative to justify their inclusion.

The defence pointed out that these murders were famous and many people in Ireland would have searched for information relating to them over the years.

Michelle Ryan, Mr Ryan’s daughter, also told gardaí that Quirke warned her father to “stay away from Mary Lowry”. Ms Ryan told gardaí that her father was at a Brendan Grace concert with Ms Lowry, Quirke and Quirke’s wife Imelda when the accused approached him. As this is hearsay it could not be said in front of the jury and the prosecution did not try to include it in the evidence.

Gardaí also wanted to show that Quirke was lying when he said he saw something strange in the tank when he went to suck water from it with a vacuum tanker.

To show this gardaí reenacted what Quirke would have seen, opening the tank in the same way Quirke explained he had opened it to push the hose from the vacuum tanker down into it.

When Superintendent Patrick O’Callaghan looked he could see nothing inside the tank and determined that Quirke was lying. The defence pointed out that gardaí had not employed an engineer to ensure that what they were looking at was exactly what Quirke had seen. They did not carry out any measurements and did not take into account lighting conditions, time of day, or time of year. Ms Justice Creedon said the reenactment was “frail” and ruled that it should not be shown to the jury as evidence.

Most of what the defence objected to was allowed by Ms Justice Creedon.