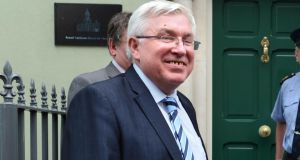 Liam Irwin of the Revenue Commissioners. “The market is staying static and the seizures are down, it’s just that the transportation networks have improved.” Photograph: Dara Mac Donaill

Seizures of counterfeit and smuggled cigarettes have plummeted in the Republic this year as gangs involved in the drugs trade have moved into the area and enjoyed considerable success in evading detection.

If trends witnessed in the first eight months of the year are maintained until the end of 2013, seizures will be at their lowest levels for a decade and a half and will have fallen by two-thirds on the €95 million to €110 million seen in recent years.

This is despite the fact that demand for illegal cigarettes remains at all-time highs, with smokers keen to source packets of 20 for around half the price of a packet on sale in legitimate retailers.

Interceptions are taking place more infrequently than before and involve smaller quantities, despite the Revenue Commissioner’s own research that the black market trade remains steady at around 13 per cent of the total cigarette sales market in Ireland.

“The market is staying static and the seizures are down, it’s just that the transportation networks have improved,” said Commissioner Liam Irwin.

He added Revenue’s most recent research revealed the black market trade in illegal cigarettes in Ireland was static at an estimated 14 per cent of the legitimate, cigarette trade.

Revenue suspects while hauls of cigarettes were being smuggled into the State in the back of trucks in quantities of up to 500,000 packs of 20, gangs are now becoming more sophisticated.

The hauls are now being broken down into much smaller quantities, with gangs booking space in containers in sea freight that are also carrying legitimate cargo for other reputable businesses.

Revenue also believes once the cigarettes have been broken into smaller quantities, some consignments are being smuggled in trucks or vans and that the same effort is being made to conceal them as has always been taken with expensive drugs like cocaine and heroin.

“We suspect they are coming in that way in vans, so we’ve got a new van scanner which will enable us to scan vehicles to complement the much bigger scanners we have that we used to X-ray 40ft containers,” said Mr Irwin. He added some gangs were hiding quantities of cigarettes in containers and then placing lead over them to frustrate the X-ray machines.

In other new cases, false ceilings and compartments had been built into trucks into which cigarettes had been packed to avoid detection.

Until now cigarettes had simply been “piled high” into 40ft containers in the hope they would not be scanned and opened, thus allowing their collection by truck at an Irish port for distribution.

The result has been a much higher success rate by the gangs in evading detection.

In the eight months to the end of August, some 24.8 million cigarettes had been seized, valued at just over €10 million.

The seizure figures were at record levels in 2009 and 2010 – reaching €92 million and €76.4 million – after a small number of some of the largest hauls every discovered in the history of European smuggling were found here.