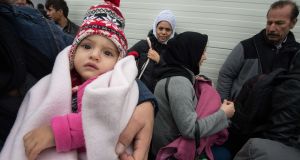 Asylum-seekers from Iraq await registration at a centre in Giessen, western Germany, December 2nd, 2015. The International Protection Bill, currently before the Seanad, could see asylum-seekers being swiftly deported from Ireland after a “cursory examination of their applications”, according to Sue Conlon of the Irish Refugee Council. File photograph: Boris Roessler/AFP/Getty Images

Proposed legislation on the asylum-application system should be withdrawn rather than rushed through the Oireachtas as is currently happening, a number of organisations have said in a joint statement.

The International Protection Bill, currently before the Seanad, is to be subjected to a guillotine in that chamber on Monday, with the Government intending to pass the law before Christmas.

Four organisations with an interest in the issue - Doras Luimní, the Irish Refugee Council, Migrant Rights Centre Ireland and Nasc - issued a joint statement on Friday asking for the Bill to be withdrawn.

However a spokesman for the Department of Justice and Equality said the Bill will bring Ireland’s asylum application procedures into line with other European states and is the single most important reform in the area by this Government.

At a time when Europe is experiencing the largest refugee crisis since the second World War, the new law could see asylum-seekers being swiftly deported after a “cursory examination of their applications”, according to Sue Conlon, chief executive of the Irish Refugee Council.

“ The outcome of passage of the Bill, as it stands, will lead to people being at risk of being returned to persecution or serious harm and refugees separated from family members,” she said.

The principal purpose of the Bill is to introduce a single application procedure to reduce the length of time that people applying for international protection spend in the system. Attempts have been made to bring in such a procedure for more than 10 years, the groups acknowledged, but the Government was attempting to “steamroll” the legislation through within four weeks and without proper debate and scrutiny.

Fiona Finn, the chief executive of Nasc, an Irish immigrant support group and a member of the working group on the protection process, said it was “simply not true”, as had been claimed by the Minister for Justice and Equality, Frances Fitzgerald, that the Bill implemented the key recommendations of the working group.

“With the exception of the single procedure, the Minister has cherry-picked a handful of the more conservative recommendations and ignored any positive recommendations, such as the right to work, early identification of vulnerable applicants, and the application of the best interests of the child principle for all asylum-seeking children,” she said.

“In addition, the Bill erodes rights to family reunification and brings in harsher detention measures. The single procedure is necessary to improve the protection system, but not at this cost.”

Leonie Kerins, director of Doras Luimní, which supports migrants in the Limerick and greater midwest region, said the speed with which the Bill was being progressed was a “deliberate attempt to prevent proper debate on the more alarming areas of the legislation.”

The spokesman for the Department of Justice said the fundamental premise of the working group’s deliberations was that the length of time people spent in direct provision was unacceptable.

Further matters arising in the direct provision system are the subject of ongoing discussions by the cabinet committee on social policy which meets again next week, he said. The Bill before the Seanad does not have any remit to address issues around the direct provision of accommodation, meals, education, healthcare, facilities etc that are contained in other chapters of the working group’s report, he said.

Publishing the Bill on November 19th, the Minister said the introduction of a single application procedure to replace the current multi-layered and sequential system would allow Ireland to “efficiently grant international protection to those who are entitled to it. At the same time, it will identify, at a much earlier stage, persons who have no entitlement to stay in the State and who can safely return to their country of origin.”

The Minister said the publication of the Bill and its early enactment and implementation were key pillars of the reforming recommendations made by the working group.