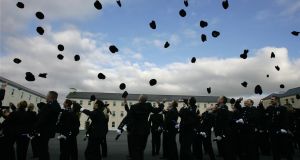 The group established to monitor reform at the Department of Justice has come out in strong support of a controversial proposal to create an independent management board for the Garda.

The Policing Authority had strongly questioned the wisdom of creating a new board at the top of the Garda, as proposed by the Commission on the Future of Policing in Ireland.

However, in its second report published on Tuesday the Effectiveness and Renewal Group (ERG), under chairman Pádraig Ó Ríordáin, has weighed in and strongly supported the proposal.

It said the mooted Garda board would strengthen the internal governance and management of the force.

“We believe the introduction of this board will materially reinforce the effectiveness of the Department’s new governance and oversight structures,” it added.

Minister for Justice Charlie Flanagan last week publicly backed the proposal, saying a new Garda board would operate in the same way boards of semi state agencies did. It would support Garda Commissioner Drew Harris with a range of expertise from within the board.

The commission, chaired by former US police chief Kathleen O’Toole, last month reported and made 50 recommendations.

Among those was the creation of a new independent management board. It also recommended a new Policing and Community Safety Oversight Commission (PCSOC) which would supercede the Policing Authority and Garda Inspectorate.

But the authority said it was not clear to it “how the public interest and the current level of transparency can be maintained, let alone enhanced” by creating a new board.

The Policing Authority believed Garda oversight needed to be simplified and could not see how the creation of “two further layers” of oversight would achieve that.

Aside from supporting the proposed new Garda board, the ERG has also welcomed the appointment of Aidan O’Driscoll last month as new secretary general at the Department of Justice.

The group said this would facilitate the reforms needed in the Department. The post has been vacant for most of the last five years.

The ERG also welcomed the fact that tendering had begun to appoint consultants to advise the Department on its reform programme. Those consultants, it added, should be in place in the middle of next month.

Like the Garda, the Department of Justice has been hit with repeated crises in recent years. The ERG is the latest in a series of efforts to reform the department.

In 2014 the Toland Group carried out an independent review of the department. It concluded the department was closed, secretive and silo driven with “significant leadership and management problems”.

The report recommended a change in the leadership and management routines and systems as well as a structured approach to how agencies and key relationships are managed so they are more accountable.

One key recommendation was a restructuring of the department into portfolios of justice and home affairs, the former dealing with criminal and civil law reform, crime and security, the latter responsible for policing, prisons, courts, equality and integration.

However, a review by consultants EY published in February noted how splitting up the department had not occurred four years on though it was still urgently needed.

Just before its publication the ERG was established. It was heavily critical of the slow pace of change in its first report, in June. It was especially critical of the continued failure to fill the post of secretary general at the top of the department.

However, in its report published yesterday the ERG was much more upbeat in its outlook around the pace of change in the department and welcomed the appointment of Aidan O’Driscoll as secretary general.

He moved into the post last month from his previous position as secretary-general at the Department of Agriculture.