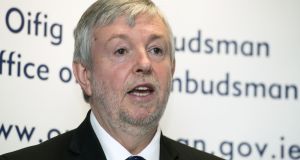 Information Commissioner Peter Tyndall: Cavan County Council’s refusal was appealed by “The Irish Times” to the commissioner, who has overturned it. Photograph: Dave Meehan

The Information Commissioner has annulled a decision by Cavan County Council to refuse to disclose information about an investigation into allegations of financial misconduct in the council.

The investigation was prompted by a council employee raising questions about the relationship between certain other council employees senior to him and contractors working for the local authority.

Last April, the council refused to either confirm or deny the existence of any records held relating to the investigation, which were sought by the Irish Times under the Freedom of Information Act.

The refusal was appealed by The Irish Times to the commissioner, who has overturned it.

A spokeswoman for the council said on Tuesday that the decision would not be appealed to the High Court. The council would readdress the information request and reach a new decision within the timeframe laid down in the Act.

In his ruling, dated October 26th, Stephen Rafferty, a senior investigator with the Information Commissioner, said he examined only the council’s use of the refusal to confirm or deny option available in the Act in dealing with the Irish Times.

Mr Rafferty said it was “clear” that there was an investigation into “allegations of a breach of financial procedures”.

“In such circumstances,” he ruled, “I fail to see how the disclosure of the existence of relevant records, if such records exist, could possibly prejudice the future supply of similar confidential information.”

He advised the council that, if such records existed and they wished to refuse to disclose details to avoid certain harms, “it is incumbent on it to consider each record and to identify both the harm and the basis on which it considers that the release of each record could give rise to that harm . . . I direct the council to conduct a new decision-making process on the FOI request”.

The investigation is being carried out by former Wicklow county manager Eddie Sheehy, who is now an associate lecturer in local government at the Institute of Public Administration. He interviewed council staff in April and local media said his report was expected in June.

The Department of Local Government has told the council it expected to be given a copy of the report when finalised. The department said it was yet to receive a report but expected to “in the near future”.

“Our understanding is that the investigation being carried out by Cavan County Council is a complex one, which is being conducted in a thorough, robust and methodical manner. As such, it has taken longer than initially anticipated,” said the spokesman.

Organisers of Belfast and Derry protests could face prosecution 20:06
Green Party’s Catherine Martin confirms she will stand against Eamon Ryan 20:01
NCT and driver theory test centres to reopen from Monday 18:55
Call for the protection of midwifery-led maternity units 18:29
Brinks Cash Services to close three branches, with 160 jobs at risk 18:24