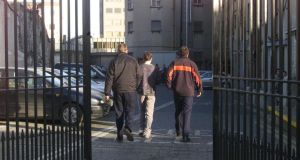 Prison service chief Michael Donnellan said that while some luxuries extended to inmates might seem too liberal, the service must try to get through to “angry” criminals. Photograph: Garrett White/Collins

The role of the prison system is to “build up” and “bring back” criminals by treating them with humanity, the head of the Irish Prison Service has said.

Michael Donnellan said while some luxuries extended to prisoners might seem too liberal, the prison service must try to get through to “angry” criminals, including those with a violent record in prison.

“To crush people more, in my experience, doesn’t really work. It makes people more angry. What you’ve got to try to do is build people up so we can have a safer society.”

“A humane prison service is about trying to take people who are broken and build them back up again,” he said.

“[But] no level of violence is tolerable. I’m very clear about that . . . we take all necessary steps including criminal convictions.”

Mr Donnellan made his comments in the closing session of the Prison Officers’ Association annual conference in Dromoland, Co Clare, after his management style had been strongly criticised by officers.

They have said violent prisoners, some who had attacked staff more than 100 times, had continued to enjoy rewards, days after stabbing officers.

The association said one prisoner who stabbed two officers in the head in Mountjoy last month was given €65 for his birthday nine days later and bought cake and fizzy drinks to mark the day.

They claimed another inmate involved in over 200 disciplinary incidents, including attacks on staff, had been supplied with a fish tank to pacify him and plans were being considered for a small garden he could use. This was despite his record in prison being so violent that staff dealing with him were dressing in riot gear.

Mr Donnellan said while there had been six officers stabbed or slashed in a recent six-week period, that level of violence was not typical.

He said, regarding the inmate being supplied with a birthday cake: “The information I have from the governor is that this prisoner made a shop order for some toiletries. He also, as part of that order, ordered a Swiss Roll for €1.99 and two bottles of Coke.”