Prisoners on hunger strike say they will refuse liquids 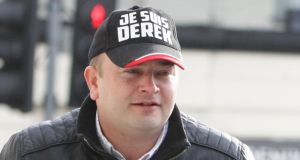 A prison spokesman said the protesters being held in Wheatfield Prison, Dublin had not been subjected to special conditions.

“They have not been on any form of restrictive regime and have full access to all of the facilities and services in the prison,” he said.

The protesters who have been refusing food since Friday, said on Sunday they were being detained in “lockdown” conditions, confined to their cells. In a statement circulated by his partner Siobhán Walsh, jailed protester Derek Byrne from Donaghmede said he and Paul Moore from Kilbarrack, would begin refusing liquids from Monday if the decision to transfer them from Mountjoy prison was not reversed.

The men say it is not easy for their families to visit them in Wheatfield, which is in Clondalkin, and want to be transferred back to Mountjoy in central Dublin.

The statement said the men “have been locked up/ confined to a cell for the last three days on complete lockdown in Wheatfield Prison”.

It asked that there be “daily protests at shopping centres connected to main roads and to keep our stories highlighted”. The men are also calling on people to hold silent, peaceful candlelit vigils outside the homes of Fianna Fáil, Fine Gael and Labour party TDs.

Mr Byrne’s family said his children had been traumatised by his experience.

Socialist TD Paul Murphy said he would seek permission from prison authorities to visit the two protesters today. He said he did not advocate the use of hunger strikes as a tactic but hoped to broker a deal with the authorities which would see the prisoners being moved back to Mountjoy.