Priest pleads for no revenge attacks after Belfast shooting 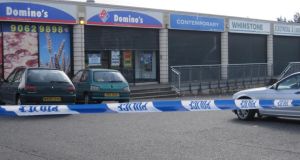 A general view of the area outside Domino's Pizza in the Turf Lodge area in the west of Belfast where pizza delivery man Kieran McManus was killed when he was gunned down last Saturday. A Requiem Mass was held for Mr McManus today. Photograph: Lesley-Anne McKeown/PA Wire

A priest today pleaded for no retaliatory attacks by friends of a man shot dead in west Belfast.

Kieran McManus (26), a delivery driver, was gunned down in front of his teenage brother Christopher (16) as he walked towards his car outside a pizza takeaway in Kennedy Way on Saturday night.

Relatives believe he was shot as part of a vendetta after his family fled their home three years ago. A car belonging to Mr McManus was burned out in February.

Father Brendan Smyth told mourners at Requiem Mass at Holy Trinity Church in the city’s Turf Lodge area, where Mr McManus lived before moving to Crumlin, Co Antrim, that it was understandable for emotions to run high among friends seeking revenge and retribution.

He said: “All I can say and plead for Kieran’s death to be the end, the line drawn under these sad days, for nothing will bring Kieran back, nor should, by what we may say, or what we may do may only add to the heaviness of heart, or add to the burden that has been forced upon the shoulders of Kieran’s family.”

His mother Sally, four brothers and two sisters were among the mourners. Mr McManus had a five-year-old son.

Father Smith added: “Revenge or retribution is a nasty word and a road that will lead to added heartache. For those who may contemplate such a road, I beg you don’t. For it is a road that you will force Sally, young Kieran, and Joseph, Patrick, Michael, Christopher, Bernadette and Michaela, and all his family, I think that they have suffered enough.”