Police can fly with Boston Tapes, but can not examine the contents 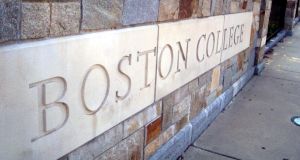 Winston “Winkie” Rea was among dozens of loyalists and republicans who provided testimonies to Boston College researchers compiling an oral history of the Northern Ireland conflict.

Police are to be allowed to fly back from the US with the interviews a former loyalist prisoner gave to a university project – but they must not examine the contents. The Court of Appeal lifted an injunction so that two PSNI detectives in Boston can return with the tapes Winston “Winkie” Rea is battling to stop them from inspecting.

Senior judges ordered that the recordings are to remain sealed and then handed over to the US Consultate in Belfast until a decision is reached in the legal action.

Mr Rea is appealing a failed High Court bid to prevent police investigating murder and other paramilitary crimes from accessing the tapes. He was among dozens of loyalists and republicans who provided testimonies to Boston College researchers compiling an oral history of the Northern Ireland conflict.

Interviews were given on the understanding that tapes would not be made public until after their deaths. But those assurances were dealt a blow in 2013 when detectives investigating the abduction and murder of Belfast mother-of-10 Jean McConville back in 1972 secured the transcripts of former IRA woman Dolours Price’s account. That material was handed over following court battles on both sides of the Atlantic.

Mr Rea, a son-in-law of the late UVF leader Gusty Spence, claimed a subpoena for his tapes is unlawful and unspecific. During judicial review proceedings the court was told an investigation has been launched into serious crimes stretching from the seventies to the late nineties. The alleged offences include murder, directing terrorism, membership of a proscribed organisation and robbery.

An international request for the tapes said police have information that Mr Rea was a member of the Red Hand Commando whose interviews would assist investigations into those crimes.

On Monday, Mr Justice Treacy threw out his challenge after holding that the legal test for seeking the material had been met. Following that verdict two PSNI detectives boarded a flight to Boston to collect the recordings. But with their flight mid-Atlantic, Mr Rea’s legal team secured a last-minute order restraining any handover while they contested the ruling.

In the Court of Appeal on Friday, Ronan Lavery QC, for Mr Rea, argued that prosecuting authorities were acting on a hunch rather than any firm knowledge that the tapes contain information relevant to any investigation.

He also claimed the request, made under the Crime (International Co-operation) Act, breached Rea’s right to privacy under European law. “This cannot be a charter to snoop on material that falls outside the EU guidelines,” Mr Lavery contended.

However, Peter Coll QC, representing the Public Prosecution Service, claimed Rea had no reasonable expectation of privacy around what he told the Boston researchers. He argued: “He was not given a cast-iron, boiler-plated guarantee that whatever he said would, until the time of his death, be protected from all outside influences.”

The three judges hearing the appeal reserved their decision until early next week. But they agreed to a request by Tony McGleenan QC, for the Chief Constable, that the officers scheduled to travel back from Boston tomorrow be allowed to bring the unopened tapes with them. Based on an undertaking given on behalf of the PSNI, Lord Justice Coghlin confirmed the injunction would be lifted.

He emphasised: “The material that the college is prepared to surrender in answer to this request is handed to police officers in sealed containers upon which the seals can be clearly seen. “It follows from that if they are interfered with that can also be seen.”

The judge further ordered: “These materials must travel with them from the United States to Belfast where they are to be deposited with the American Consulate and remain on American territory until we give a decision.”