Online hate-speech ‘accounts for 10 per cent of racism’

Immigrant Council marks European Day for the Victims of Hate 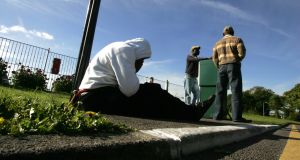 Online “hate” accounts for more than 10 per cent of racism cases reported to the Immigrant Council of Ireland.

Figures released by the council to coincide with European Day for the Victims of Hate show that internet “hate speech” or the use of social media to attack or spread hatred of people on race grounds is on the increase.

In past 12-months online hate speech has accounted for 11 of 100 racism cases reported to the council, chief executive Denise Charlton said.

“Incidents include abuse through posts on social media, but we are also concerned about right wing websites many with Irish contributions which despite complaints from members of the public often remain online for weeks or months.”

Today marks the second anniversary of the massacre of 77 people in attacks in Oslo and Utoya Island by far-right extremist Anders Behring Breivik, the council is joining campaigners across Europe in calling for firm action against hate speech.

“The use of websites, social media and blogs to spread hate is a challenge which Ireland and Europe ignores at their peril. The events in Norway two-years ago today sent shockwaves across the continent, yet still the internet is being abused by those whose only message is of hate,” Ms Charlton said.

The effect of “offensive, racist and foul language” used online should not be underestimated, she said.

“Cyber racism potentially has a significant impact on online users; individuals, even though they were not always targeted directly, reported that they felt “upset”, “distressed” and “horrified” by the language used on the internet.

Incidents of cyber racism were reported to the council on the grounds that the individual was the direct target of a comment; social media sites did not react to appeals to take down the offensive post; or it was unclear what could be done about it, especially when sites were in a different jurisdiction.

“It is clear our current laws and rules are not working.The Government, which is currently considering the recommendations of the Joint Oireachtas Committee on Transport and Communications regarding social media needs to widen that exercise to include these sites.”

Following the events of 2011, Norway had taken an active role in working to remove hate speech from the internet, she said.

“Ireland needs to support that action and ensure that measures are also taken at a European level to combat this issue.”