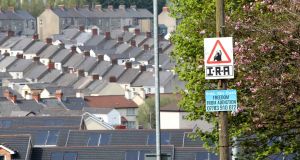 A 39-year-old man has been arrested in connection with four security alerts which began in Derry on Sunday morning.

The man has been taken to the serious crime suite at Musgrave police station in Belfast for questioning.

All four security alerts have now ended and all cordons have been lifted. “That’s all four scenes finished – it’s been a long day,” said police on social media. “Thanks for your patience.”

Strand Road in Derry had been closed between Rock Road and Clarendon Street while the police examined a suspect vehicle left outside the city’s main police station.

Residents in the area of Moss Park in Galliagh were evacuated during a security alert there, as police removed a number of items from a house.

Previous security alerts were also issued at Harty Court, and another outside the home of Independent councillor Gary Donnelly in Iniscarn Road in Creggan.

Suspicious objects discovered in Harty Court and Iniscarn Road were examined by specialist officers who declared them to be non-viable devices. They were removed for further examination.

Earlier in the day, the Police Service of Northern Ireland (PSNI) had said on Twitter that the alerts would cause “major disruption”.

“Houses will be evacuated so please be on hand to help affected family, friends or neighbours.

“We can only apologise for the inconvenience.”

The unrest comes after journalist Lyra McKee was shot in the Creggan area of the city on Thursday night.

Police say that they are not investigating any link between these latest alerts and the murder of Ms McKee.

Two men, aged 18 and 19, have been arrested in connection with her murder.

At a media briefing on Saturday afternoon in Derry police said they believe the two teenagers arrested in connection with the murder are members of the dissident republican group the New IRA.

McKee was killed after shots were fired during rioting in the Creggan area of Derry. The PSNI has said it believes the New IRA was responsible.