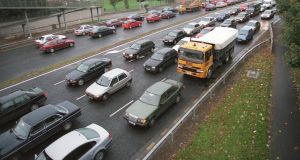 Stormont ministers are to consider measures aimed at reversing the rise in the number of road deaths. Photograph: Joe St Leger/The Irish Times

Stormont ministers are to consider a package of measures designed to reverse a rise in the number of road deaths after years of significant declines.

Concern is mounting on both sides of the Border that road deaths could be on the rise again. Mr Durkan’s office pointed out that the North’s death toll now stands at 45, compared to 34 at this time last year. If current trends are maintained, Northern Ireland is on course for 59 deaths, the figure reached in 2011.

The Garda recently warned drivers against complacency, with road deaths in the Republic on the rise for the first time in seven years. Figures stand at 155 so far this year compared to 141 deaths in the same period last year.

However it said a reduction in numbers of officers in the Road Traffic Bureau from 1,200 to just 800 in recent years had not been matched by a corresponding rise in road deaths. According to the Garda, the most common issue across fatal crashes is still speeding.

“The proposed Road Traffic Amendment Bill, currently with the Executive, will help make that change,” he said.

“My Bill will introduce lower drink-drive limits, a new penalty regime and powers for roadside check-points. It includes provisions to better train, test and protect new drivers while they gain valuable experience.”

He said the measures would be presented to the Assembly shortly, “once I secure the agreement of my Executive colleagues”.

1 Covid-19: Limited easing of restrictions proposed as pressure grows to reopen Irish economy
2 Barack Obama urges those protesting in US to seize the momentum
3 Nursing homes dispute accuracy of HSE data on Covid-19 deaths
4 Covid-19: Varadkar downplays expectation of accelerated lifting of restrictions
5 Mother of three (41) who had to fundraise for her own cancer treatment has died
Real news has value SUBSCRIBE