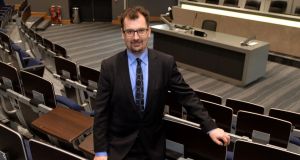 UCD’s school of law has come a long way since the first students graduated in 1911. For one thing, the School has stopped publishing the exam results of students alongside their names in The Irish Times, a practice that went on for decades.

Dean of law Prof Colin Scott says the legal profession may be steeped in tradition but the teaching of law is changing – and UCD is leading the way.

The university’s new €25 million Sutherland School of Law is pushing the boundaries of legal education by implementing an increasingly interdisciplinary and practical approach that combines classroom teaching with clinical and experiential learning.

The move is proving to be a success, with the school recently named in the Financial Times list of innovative law schools. It was the only Irish institution to make the list. In 2011, the school was identified by the authoritative QS World University Rankings among the top hundred law schools globally.

Scott says legal education hasn’t been immune from the global economic crisis, adding that it’s important for law schools to face up to the challenges of the 21st century. The economic downturn has led to a more competitive job market, with employers demanding a greater array of skills and competencies .

Being able to “think like a lawyer” is still important, but not enough. As well as legal reasoning and writing skills, law firms, and businesses in general, want graduates with leadership and negotiation skills, the ability to understand client needs and teamwork experience.

“Our graduates don’t just go into law,” he says. “They also end up working in the media, business and government. Preparation now needs to be a bit more general. We need to prepare people for a wide range of careers.

“Employers seem to want a broader range of skills rather than specialised knowledge. They want people with skills that aren’t just gotten in the classroom.”

The origins of UCD’s school of law date back to 1908. In its first 60 years, the lecturers and professors all worked part time. They would do their day jobs in politics, law and the likes and then teach in their spare time.

This was the case with JG Swift MacNeill, who was an MP in Westminster and a law professor at the school. When parliament was in session, his practice was to give his lectures in UCD on Saturdays and Mondays and to spend the remainder of the week in London.

However it became clear in the 1960s that a mainly full-time faculty was needed. Despite the shift between the mid-1960s and 1970s, from a part-time to a largely full-time academic staff, the school has maintained close links between the judiciary and legal professionals.

The plan for the new school dates back to 2006 when businessman and former attorney general Peter Sutherland offered a gift of €4 million conditional upon support of the government and university.

A multidisciplinary team, led by Moloney O’Beirne Architects, was appointed. Two of the university’s law academics – Imelda Maher and John O’Dowd – were also on the team.

The team undertook benchmarking visits to internationally renowned law facilities, including London School of Economics, the University of New South Wales in Sydney and the National University of Singapore, to gain an understanding of the key principles that needed to be considered in designing a law school to the highest international standards.

“They looked at best examples of law schools and other educational buildings. They asked what worked and what didn’t and adapted the ideas to Irish requirements.”

While university buildings were historically designed in a layered, linear fashion, with teaching spaces on lower floors and miscellaneous learning spaces tiered upwards through the building, the Sutherland building deviates from this model.

The new school incorporates a clinical legal education centre, PhD facilities and a graduate common room. Among the innovative teaching spaces in the building are a 320-seat lecture theatre, which is also a ceremonial moot court, a 200-seat theatre with rotating seats so students can work in groups and a modified Harvard style 100- seat room.

It was decided that a law library would not form part of the new school. “American schools mostly incorporate law libraries. We had a discussion around that but decided against it. It would have added to the capital and running costs to maintain a law library within the school,” Scott says. “The decision was made to keep law books part of the main UCD library. Most materials are available online now anyway.”

He adds that the new teaching spaces have helped with the transition to more practical, clinical-based learning.

“The student legal service has grown rapidly in recent years. They have a few hundred students involved now. We felt demand for more experiential learning and clinical teaching was great so we introduced new modules.”

“Legal practice involves counselling clients, negotiations, communication and drafting. We wanted to expose students to the significance of these processes and give them practice.”

Scott says the development of new modules and interdisciplinary degrees isn’t the only case of innovation at the school. From very early on, the school was looking towards the future and examining what was happening globally. A diploma in European law was established at the school in 1969, several years before Ireland joined the European Economic Community, or Common Market, in 1973.

The Sutherland building is the first purpose-built law school in Ireland since the completion of James Gandon’s design for the King’s Inns in 1816.

The new school cost €25 million, €11 million of which came from private funding from more than 100 donors. A lot of money, but considering graduates include three former taoisigh and a long line of Supreme Court judges and attorneys general, the school has a name to maintain.