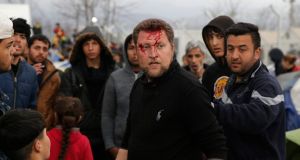 A migrant seeking to cross the Greek-Macedonian border is injured after a fight with another migrant at a makeshift camp near the village of Idomeni, Greece, March 7th, 2016. Photograph: Marko Djurica/Reuters

New legislation due to come into effect this year could see minors seeking asylum being detained in adult prisons, a conference on ethnic minority children in care has been told.

Barrister Dr Patricia Brazil said under the International Protection Act 2015, due to take effect later this year, there is a power to detain people over the age of 18.

If there is a dispute about the age of a minor, provided an immigration officer and a garda agree the person claiming asylum is over 18, they can detain that person.

“I’m sure we all would want to avoid a situation where a person who turns out to be a minor is detained in an adult prison ... with convicted and remanded prisoners,” she said.

“There is a huge duty on the immigration side to make sure their decisions are right.”

She told delegates that under the legislation, children over 14 years old can be fingerprinted without consent, as long as a social worker is present.

She had particular concerns around medical examinations. In the case of minors whose age is in dispute, an immigration officer who wants a child medically examined to establish age can obtain permission from the child or from a social worker.

Such an exam usually includes X-ray, bone density and dental examination to try to determine age.

Ms Brazil said an immigration officer can require a social worker to give consent, but there are issues about whether social workers have the legal power to do this.

Such medical examinations have a margin of error of plus or minus three years. So for the most disputed age groups, between 14 years and 17 years, the usefulness of the tests is extremely limited.

Under section 23 of the Act, the Minister for Justice or an immigration officer can require a person to undergo a medical examination to prove claims of torture or rape.

“There is no reference to consent in that section,” she said.

“I’d be interested to hear the medical practitioners’ view.”

While they are in the care of the Child and Family Agency up until adulthood, they are often placed with foster families, she said.

Once they become adults, if they are still in the asylum process, they are moved to Direct Provision, and this can raise vulnerabilities and concerns.

She said the asylum applications for young people in care should be prioritised, so their cases are decided before they turn 18.

Ms Brazil said that, in her view, a child who is in the care of the State cannot be illegally in the State, and there is a duty on the agency to make an application for asylum on their behalf.

The conference, held last Friday, was organised by The Independent Guardian Ad Litem Agency (Tigala) and focused on children from ethnic minority backgrounds in the care of the State.

Dr Colleta Dalikini, lecturer in social care at Dundalk Institute of Technology, outlined concerns raised by families and young people from ethnic minorities in the care system. She said there was a need for appropriate training for social workers around cultural issues and partnership with relevant community and religious groups.

She said the role of the social worker was not being acknowledged in the context of immigration.

Closing the conference, Judge Daly said while those involved in childcare cases can get caught up in the care elements, questions of immigration and status needed to be addressed in a timely manner.