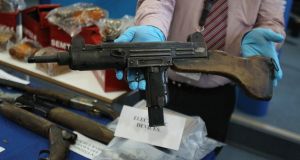 The Republic’s murder rate has fallen to a two-decade low, according to the latest official crime figures. There were 30 murders last year, down from 52 in 2014; a decline of some 42 per cent. Photograph: Niall Carson/PA Wire.

The Republic’s murder rate has fallen to a two-decade low, according to the latest official crime figures. There were 30 murders last year, down from 52 in 2014; a decline of some 42 per cent.

The murder rate in the Republic, despite perceptions of worsening and even runaway crime, was lower in 2015 than at any time since 1994 when 25 murders were recorded.

Most categories of crime declined last year, though serious sexual assaults and gun crime both increased. There was also a significant increase in the number of murder threats, though the number of homicides fell by one third last year.

However, the CSO’s crime data only captures crimes that have been recorded to the Garda, meaning the true level of offending is higher than the data suggests.

- Burglaries were down by 5 per cent, 26,246 report crimes last year. That development will come as a relief to the Garda and Government who had both been under press over the continued rise in burglaries.

The debate about rural crime was a feature of the election campaign, with claims that burglaries were occurring most frequently in rural areas, despite data showing the problem was growing much faster in Dublin.

And while some of the quarterly crime data in the last 18 months to two years suggests drug crime - at least those offences known to the Garda - was increasing, the full year figures do not support that thesis.

Like drugs offences, gun crime has declined significantly, halving in some areas, since the onset of recession and the contraction of the illicit drugs market.

However, indications it is increasing again are reflected in the full year crime data for 2015. For example, the crime of discharging of a firearm increased by 13 per cent to 151 cases. There were 205 recorded cases of possession of a firearm last year, a rise of 4 per cent.

While murders plummeted last year, murder threats increased by 42 per cent, to 593 cases.