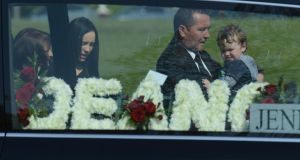 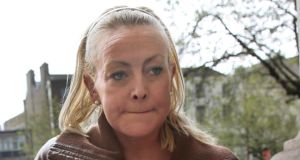 Audrey Fitzpatrick pictured arriving at the Four Courts for a High Court hearing on burial arrangements for her son Dean. Photograph: Collins Courts

The mother of stabbing victim Dean Fitzpatrick was unable to attend his funeral this morning due to illness.

Dean Fitzpatrick, a 23-year-old father of one, was stabbed to death at an apartment in Northern Cross, Malahide Road, north Dublin, last Saturday week.

“He was a young man with so much of life ahead of him,” he said during his homily. “Speaking with his loved ones, they have told me of the fact that Dean was a proud father of Leon and doted on him. Dean was a young man with plenty of life in him so it is only natural that there are so many broken hearts in this church this morning.”

A number of items of importance to Mr Fitzpatrick were placed on his coffin by friends and family, including his baseball cap, a miniature bicycle, headphones and a cross.

Fr McCrystal said Dean’s sister Amy, who disappeared in Spain at age 15 in 2008, was also “very much in our prayers today”.

One of Dean’s closest friends, Kevin Harris, paid tribute to his friend towards the end of the funeral Mass, saying he was a loving father, son, brother and friend.

“He was a lovely young man and a great friend to all of us. Words can’t describe how much you’ll be missed,” he said.

“Until we meet again, rest in peace, Deano.”

A dispute over the funeral arrangements had arisen between his separated parents. The High Court last week released his remains to his partner.

Amy and Dean Fitzpatrick had gone to live in Spain with their mother and Mr Mahon four years before Amy’s disappearance.

About a year after his sister disappeared, Dean Fitzpatrick returned to Ireland to live with his father. His mother and Mr Mahon continued to live in Spain until about 18 months ago.