Marian Price has conviction set aside 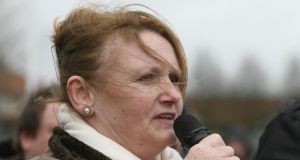 Marian Price was not at Belfast Magistrate’s Court for Monday’s short hearing and was convicted in her absence. Photograph: Niall Carson/PA Wire

A conviction against veteran republican Marian Price has been rescinded by a court, 24 hours after she was found guilty of two public order offences at a protest in Belfast over three years ago.

Price (59) had been charged with resisting and impeding police after a protest in the New Lodge area of the city on July 10th, 2010.

Price, who is also known as Marian McGlinchey, was not at Belfast Magistrate’s Court for Monday’s short hearing and was convicted in her absence.

But yesterday her lawyer, Peter Corrigan of Kevin Winters law firm, presented a new medical report which he said showed his client would not have been well enough to give evidence on her own behalf. He urged district judge Fiona Bagnall to set aside Price’s conviction.

The judge agreed to the request and adjourned the case for four weeks. Judge Bagnall said she would try to facilitate Price by ensuring there would be short breaks during the hearing.

Price served a jail sentence along with her late sister Dolours Price for the 1973 IRA bomb attack on the Old Bailey in London.