Man who repeatedly sexually abused his niece jailed for 11 years

Attacks during ‘perverted games’ took place regularly while he was babysitting 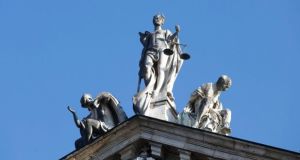 A man who repeatedly sexually abused his young niece has been jailed for 11 years.

The man, who cannot be named to protect the anonymity of the victim, played “perverted games” with the child during which he would pretend to be a baby or dress up as her mother.

During the “mammy and daddy game” he would be naked and use her baby doll to pretend he was having a baby. He would then sexually assault the child until he ejaculated.

In the baby game, he would be again naked and pretend to be sick. He would tell the victim, who was aged four when these assaults began, that she needed to make the baby better and would force her to rub his back passage.

The attacks took place regularly while he was babysitting the child at weekends when her parents went to the pub. The abuse continued until the child was 11 and resulted in her developing an eating disorder into her teenage years.

The Dublin man pleaded guilty to 28 sample counts out of 78 charges of indecent assault of his niece on dates between 1982 and 1988.

A Probation Service report stated that he has displayed insight into victim awareness.

Reading from her victim impact report, the woman said her uncle is a depraved paedophile who took away her innocence.

“I was intimidated and controlled. He knew what was right and what was wrong and he chose wrong.”

She said she refused to allow the abuse to destroy her, stating: “He took away my innocence, but he can never take away by spirit to survive.”

Judge Karen O’Connor said the court must sentence him based on his level of maturity at the time of the offending. She said he was a child when it began but his moral culpability increased as the abuse continued.

She said the abusive behaviour escalated as he grew older. She described increasing levels of depravity and degradation being inflicted.

During one later attack, the man attacked her with a poker and in another he raped her in the shed of her granny’s home.

Judge O’Connor set an overall sentence of 11 years. She suspended the final year for two years on condition he keep the peace and engage with the Probation Service.

Conditions include that he engage in sex offender treatment if deemed suitable and with addiction counselling services.

The court heard that when the victim disclosed the attacks to her mother, her uncle was no longer asked to babysit. The victim said she was told to be quiet about the abuse because if her granny found out she would drop dead with a heart attack.

She cut her wrists when she was aged 15 and was hospitalised. A member of her family visited her and warned her not to disclose the reason behind her suicide attempt.

She said she was let down by every adult in her life. She said as a teenager, she tried to make herself sick and thought dying was the only way to make the abuse stop.

After his arrest in 2016, the man claimed he was drinking a lot at the time and had a poor recollection of events.

Paddy McGrath SC, defending, said his client initially found it very difficult to face up to his actions but he never queried the woman’s account.

He said the man now fully accepts his responsibility. He said he is a heavy drinker who began drinking at an early age and drinks heavily every day in his local pub.

The woman said her childhood was brutally taken away in the most vicious and terrifying way by her uncle’s perverted nature and selfish actions.

“I considered myself utterly filthy. I felt so unloved and worthless. It was a very dark and lonely place to be in my mind. I wanted to die.”

She said as a young child she heard the words “rest in peace” said in church and longed for the possibility of such peace where nobody could touch her body.