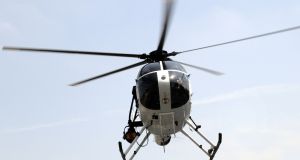 On July 19th, a PSNI helicopter was searching cliffs near Portrush, when Christopher McCrory shone a laser at the crew.

A camera on a police helicopter recorded a man, wearing only boxer shorts, shining a laser from a bedroom at the aircraft as it searched for a vulnerable missing person at Portrush.

The details emerged at Coleraine Magistrates Court on Monday where Christopher McCrory (30), of Glendun Close, Portrush, pleaded guilty to recklessly or negligently acting in a manner likely to endanger an aircraft, or any person in an aircraft.

On July 19th, the PSNI helicopter was searching cliffs near Portrush, along with the Coastguard and Portrush RNLI lifeboat. A missing woman was found safe.

A prosecutor told the court on Monday that at 12.30am on July 19th, a police helicopter was 700ft above Portrush taking part in the search for a “vulnerable missing person”.

She said the pilot and two other personnel onboard “had to avert their eyes” when a green laser was shone at them. The prosecutor said the chopper’s camera recording system located the laser being shone. It was from the rear upstairs room of a house and a male could be seen wearing only boxer shorts.

The male then opened the back door and directed the laser twice more at the helicopter, the court was told.

Police went to the house at 1.10am where McCrory was with his mother and girlfriend. McCrory initially told police “there were two boys in the back garden shining lasers”. However, he subsequently admitted to using the laser.

Fining the defendant £350, the judge said his sentencing powers in the case were “ridiculously light”.

“I can only impose a financial penalty and that does not mark the gravity of the offences.” The judge said it was “bizarre” he could send people to prison for offences like drinking on the street “but not for shining a laser at a helicopter”.