Man collapses and dies on discovering intruders in home 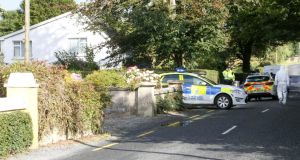 The scene outside Doon in Co Limerick where a man’s body was found following a suspected burglary. Photograph: Liam Burke/Press 22

A priest who administered the last rites to a 62-year-old man who collapsed and died outside his Co Limerick home after returning to find intruders in his house has described him as a “thorough gentleman”.

Gardaí received a call shortly after 1.30pm yesterday and found the body of John O’Donoghue from Toomaline, Doon, at the edge of the driveway of his house on the outskirts of the village.

It is believed he had just returned home with his sister when they were confronted by intruders who had broken into the house. He collapsed and died, apparently from a heart attack. Two intruders fled the scene on foot after their getaway driver drove away without them.

Two men from Limerick city were later arrested and were being questioned at Henry Street Garda station.

Local parish priest Fr Tony Ryan, who was called to the scene shortly after 2pm, said Mr O’Donoghue had been working in his house and was bringing back material to work on.

“He was just coming and he noticed a car parked opposite. The thieves came flying out of the house; he got such a shock he got a massive heart attack,” Fr Ryan said.

“He was a thorough gentleman, a most intelligent and inoffensive person and I want to extend my sympathy to all his family.”

Mr O’Donoghue, who was unmarried, lived with his sister, a retired nurse.

“He was self-employed and a gifted and outstanding carpenter,” said Fr Ryan. “The community is very upset, and the whole community is outraged at what happened. There have been an number of break-ins in the area recently but Doon is a flourishing community with great people.”

The house was sealed off and the office of the State Pathologist was notified.

It is believed there were a number of other break-ins in the Cappamore and Doon areas yesterday.

Fianna Fáil spokesman on justice Niall Collins, who is a Limerick TD, said the Government was leaving the area with little or no Garda resources.

Local Fianna Fáil councillor Noel Gleeson said it was a shocking state of affairs that people went out shopping and came back to see intruders in their home.

“Rural Ireland is being decimated as regards law and order, that’s the bottom line. We can’t say it often enough and hopefully someone might heed us . . . because that’s what’s really annoying people in the rural areas that they have no Garda service . . . The presence of a garda on the ground cannot be beaten,” he said.

Anyone with information has been asked to contact Bruff Garda station on 061-382940.