Love/Hate actor admits to having cannabis worth €100 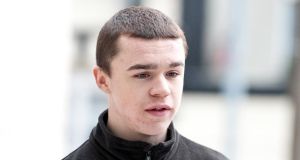 Love/Hate actor Leroy Harris arrives at Dublin District Court at an earlier date before pleading guilty to unlawful possession of a quantity of cannabis, and having the drug for the purpose of sale or supply, at Sheriff Street, in north inner city Dublin, on October 14th last. Photograph: Collins Courts.

A young actor who featured in the controversial cat-killing scene in hit crime TV series Love/Hate has been remanded on bail pending sentence after he pleaded guilty to a cannabis dealing charge.

Today, Leroy Harris (19), admitted being in unlawful possession of a quantity of cannabis worth €100, and having the drug for the purpose of sale or supply, at Sheriff Street, north inner city Dublin, on October 14th last.

The actor, who has no prior criminal convictions, had been caught with two packets of cannabis, Dublin District court heard.

He was searched in a premises by gardaí after he was seen putting a suspected drugs package down his trousers.

Defence solicitor Cahir O’Higgins said the 19-year-old had the cannabis for friends.

He told Judge Michael Walsh that Mr Harris had taken up acting in Marino College when he was in his fifth year and has great potential for the future.

Mr O’Higgins said Mr Harris was very lucky “to secure a role in a very prominent drama on RTÉ” and this could open up doors for his acting career. Pleading for leniency, he said it is important that Mr Harris would be able to travel.

“A conviction might prejudice his capacity to travel,” the lawyer said.

The court also heard that in his spare time Mr Harris teaches acting to youngsters on a voluntary basis.

“If the court could see any way to leave him without a conviction, he will grasp that opportunity with both hands,” said Mr O’Higgins.

Judge Walsh adjourned sentencing until a date in January to allow time for probation report on the 19-year-old to be prepared and furnished to the court.

Dressed in black jacket, runners and grey tracksuit bottoms, Mr Harris did not address the court and has been remanded on continuing bail.

The budding actor, who has an address at from Mariner’s Port, Dublin, featured in the latest season of the hit RTÉ drama Love/Hate.

His role in the shocking opening scene of the series was at the centre of a controversy for its graphic depiction of his on-screen character, Glen, filming his friend Wayne firing shots from an automatic weapon and killing a cat.

Previously he had earned a nomination for an award from the Irish Film and Television Academy (IFTA) for his role in the RTÉ series Prosperity, where he played the role a teenager bullied because he had a stammer.

Following an earlier hearing, on November 5 last, when Mr Harris made his first court appearance, his solicitor Mr O’Higgins had told reporters that his client is “very respectful of the court process and court procedures and is anxious to conduct himself in a way that would not jeopardise his future”.