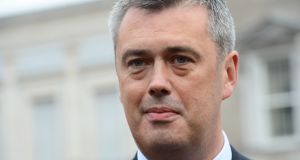 Lawyers for Denis O’Brien are due to return to the High Court on Monday requesting it to join Galway-based businessman Declan Ganley as a co-defendant in Mr O’Brien’s long-running case against Red Flag Consulting.

Mr O’Brien is basing his request for an order joining Mr Ganley on an affidavit sworn by the former Fianna Fáil TD for Galway East, Colm Keaveney, together with another sworn by a public relations consultant, Johnny Fallon, and a third, supporting and explanatory affidavit, sworn by his solicitor in the Red Flag case, Diarmuid O’Comhain of Eames Solicitors.

Mr Keaveney, a former chairman of the Labour Party and a Labour Party TD before switching to Fianna Fáil after a brief spell as an Independent, has been a long-standing and vocal critic of Mr O’Brien.

However, in December, he swore an affidavit favourable to the businessman’s case against Red Flag.

It is understood that Mr Ganley has sworn an affidavit (which is a statement sworn before a solicitor or Commissioner for Oaths) reaffirming his already made public statement that he is not, and never has been, the client for whom Red Flag assembled a dossier about Mr O’Brien. This dossier prompted Mr O’Brien’s legal action against the company and several named employees.

Mr Ganley is understood to say also that he is not part of any alleged conspiracy against Mr O’Brien and that his actions against the businessman (Mr Ganley is suing the State and Mr O’Brien over the awarding to Mr O’Brien of Ireland’s second mobile phone licence) relate to the findings of the Moriarty tribunal.

Further, he is believed to take issue with Mr Keaveney and Mr Fallon’s recollections of meetings with him.

Mr Ganley will be supported by an affidavit from one of his employees, John McGuirk, whom Mr Keaveney seeks to portray in his affidavit as confirming that Mr Ganley was Red Flag’s client. Mr McGuirk denies the comments Mr Keaveney attributes to him.

Red Flag’s chief executive Karl Brophy will reject, also by affidavit, the assertions of Mr O’Comhain, maintaining they are not true.

But detailed attention is also likely to fall on an affidavit sworn by a new player in the saga, which began in October 2015.

He is Alan Hynes, Mr Keaveney’s parliamentary assistant from November 2012 to February 2016, when Mr Keaveney lost his Dáil seat in Galway East.

In his sworn affidavit, Mr Hynes details what he said Mr Keaveney told him of his dealings with what Mr Hynes describes as “a representative” of Mr O’Brien.

At the time, Mr Keaveney had failed to be re-elected to the Dáil, did not have an alternative job, was heavily in debt, had been declared bankrupt and was being sued by Mr O’Brien.

The businessman was seeking “aggravated and exemplary damages” from the former TD.

However, that case was settled last October, on the same day that Mr Keaveney gave Mr O’Brien information which he, Mr O’Brien, says proves Mr Ganley is Red Flag’s client.