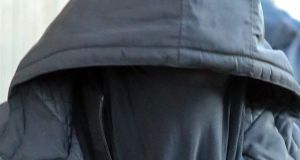 Former Defence Forces member Lisa Smith has been denied bail after being charged with membership of Islamic State.

The 38-year-old year old Dundalk woman was brought to Dublin District Court Number Four in the Criminal Courts of Justice on Wednesday morning by gardaí from the Special Detective Unit.

Wearing a black burqa and a winter coat, Ms Smith sat with prison officers for the 40 minute hearing.

Detective Garda Gareth Kane told Judge Colin Daly he arrested Ms Smith for the purposes of charge on Tuesday morning at Kevin Street Garda station. He said she made no reply when he put the charge to her.

Ms Smith is charged that under Section Six (1)(i) of the Criminal Justice (Terrorist Offences) Act 2005 which makes it an offence to join a foreign unlawful organisation.

It is alleged that between October 28th, 2015 and December 1st, 2019 at a location outside the State. Ms Smith was a member of a terrorist group styling itself the Islamic State of Iraq and al-Islamiyya. The charge also lists the other names for the group including “Da’esh” and the “Islamic State is Iraq and Sham”.

The charge carries a maximum penalty of 10 years in prison, the court heard. Det Sgt Kane alleged Ms Smith had pledged allegiance to the terror group.

She made no reply to the charge and did not address the court during the hearing. She appeared with her face visible but pulled up her head covering a few minutes into the hearing.

Gardaí applied for Ms Smith to be remanded in custody pending trial on several grounds, including that she poses a flight risk. Det Sgt Kane said further charges may be brought against her in relation to alleged terrorist financing.

Ms Smith’s solicitor Peter Corrigan said in 2011 she was radicalised in Ireland while a vulnerable and suicidal woman by another person “who preyed on her vulnerabilities”.

She was looking “for answers to life”, he said. A religious leader told her in 2014 it was the duty under the Koran of all Muslims to travel to the “caliphate” established by Islamic State, the solicitor said.

Mr Corrigan said living in the so-called Islamic State does not make someone guilty of an offence of membership of a terrorist organisation. He said thousands of Muslims, including the elderly and sick, travelled to the area.

The solicitor said his client handed herself into a Kurdish group in 2019 and was taken with her daughter to a “horrendous camp” which had sewage problems and high infant morality rates.

Mr Corrigan said she survived two camps before walking through the desert to reach Turkey.

Ms Smith was interviewed by the FBI over several days and condemned Islamic State’s brutality to its agents “in the most strident terms”. This put her own safety at risk, Mr Corrigan said.

There is no evidence of Ms Smith being a member of Islamic State or of training people there, her solicitor said. He said by the time Ms Smith travelled to Syria in 2015, the fighting had ended.

Mr Corrigan said Ms Smith could have gone anywhere when she left the refugee camp - including back to Islamic State - but she chose not to.

Ms Smith did not provide financial assistance to Islamic State, he said. She gave small sums of money to people living in poverty who were in need of food, he said. insisting this money was no for “terrorist purposes.”

Mr Corrigan said Ms Smith is in an emotional state. She is separated from her two-year-old daughter “that she brought through bombs, poverty and the desert. She is missing her terribly”.

She has no reason not to show up court if granted bail, he said, adding that strict conditions could be imposed to allay prosecution concerns.

Det Sgt Kane said there are no bail conditions which would satisfy the prosecution to agree to bail.

He remanded Ms Smith in custody in the Dóchas women’s prison at Mountjoy until next Tuesday when she will appear again.

The defence applied for Ms Smith to be held separate from the general population for her own security.

Judge Daly said he would make a request to the prison governor.

Ms Smith was first arrested by gardaí at Dublin Airport on Sunday morning after getting off a Turkish Airlines Flight from Istanbul.

Ms Smith and her daughter were repatriated with the assistance of officials from the Department of Foreign Affairs who were supported by members of the Defence Forces.

She has spent the last three days being questioned by gardaí.

She had spent the last several years in Syria. Ms Smith spent much of this year in refugee camps in the north east of the country. She fled north following an invasion by Turkish forces in October before being picked up by a Turkish-backed militia.

Ms Smith served with the Irish Army and as an Air Corps steward on the Government jet before resigning and travelling abroad.