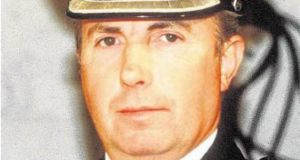 Judge Peter Smithwick said: “Either the IRA did have an extraordinary piece of good fortune, or Harry Breen [above] was the target of this operation. I believe that the evidence points to the latter conclusion.”

The fate of Chief Supt Harry Breen, the most senior RUC officer to be killed in the Troubles, was sealed the day he appeared on television displaying the IRA weapons recovered after the SAS ambush at Loughgall that killed eight IRA members and an innocent civilian.

That was the implicit finding of Judge Peter Smithwick in his monumental 1,652-page report into the murders of Chief Supt Breen and Supt Bob Buchanan in an ambush just north of the Border near Jonesborough in south Armagh on the afternoon of March 20th, 1989.

‘Classic IRA operation’
Three IRA members previously and privately in a statement and without the benefit of cross-examination informed Judge Smithwick’s tribunal that the killings were a “classic IRA operation” that involved “no help from anyone at all”.

Judge Smithwick made clear yesterday he did not believe them. His inquiry did not uncover “direct evidence of collusion” but found that one or more unidentified members of the gardaí operating in Dundalk did collude with the IRA, providing information that helped lead to the deaths of the two policemen.

But Chief Supt Breen was the chief target, Judge Smithwick appeared certain. Between August 1988 and the time of the ambush in March the following year Supt Buchanan had travelled on business to Dundalk station 20 or 21 times and was not targeted by the IRA. The judge could only identify one of those occasions – in February 1989 – in which Chief Supt Breen was with him.

Based on his “pattern of travel” IRA members could have tried to kill Supt Buchanan several times but it was Chief Supt Breen they wanted.

His central findings kept coming back to Loughgall. He believed “that the vast majority of the evidence suggests that the intention was to abduct and interrogate these officers”.

“In the latter respect, the evidence keeps pointing back to the desire of the IRA to acquire information as to how the British security services had gotten advance warning of the IRA ambush on Loughgall police station in May 1987,” he reported.

An IRA informant is almost certain to have tipped off the RUC or MI5 or British army intelligence about the planned Loughgall attack. That led to the IRA’s single worst loss of life when eight men were killed by the waiting SAS, with an innocent man also killed in the relentless gunfire. Judge Smithwick was of the view that the IRA wanted to interrogate Chief Supt Breen to establish the identity of that informant or possibly informants.

The evidence to the tribunal indicates that the IRA may also have had revenge on its mind. In a written statement to the tribunal in February three anonymous IRA members said the “instructions to the ASU [active service unit] were to intercept the car and arrest the occupants, but if that was not possible then they were to ensure that neither occupant escaped”.

The IRA said the two unarmed officers “died instantly in gunfire”. That account did not quite tally with eyewitness evidence given to the tribunal last year. A scrapyard worker who saw the incident described the gunmen letting out “a big roar like a hurrah” as they left the scene, while a schoolteacher said Chief Supt Breen tried to surrender but he was gunned down. She said he “put his hands up and they shot him”.

Chief Supt Breen went on television after Loughgall displaying the IRA weapons recovered from the scene. The IRA said he was so “very well known that this image was etched on every republican’s mind”. June Breen, the officer’s widow, in a statement told the tribunal she felt it was wrong that he had been asked by his superiors to display the weapons as it exposed him to additional danger.

She recalled how on the morning of his death she was ill in bed and that her husband told her were it not for the fact his deputy was off he would stay at home to mind her.

“It was very hard to take at the time and sometimes remains so,” she said. Ms Breen also told how her husband had instructed that were he to be killed, the then RUC chief superintendent Sir John Hermon should not attend his funeral. She did not say why. That was the sad human dimension to the killings.

In terms of fallout it seems unlikely that there will be a major negative political dimension to the Smithwick report.

The judge found there was Garda collusion but that it was localised and, it seems, at a low-ranking level. Such corruption is hard to come to terms with, but will hardly damage British-Irish or North-South relations.