Kenny criticised over failure to hand over Kingsmill files 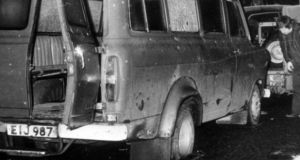 File photo dated January 5th, 1976 of the bullet riddled minibus where 10 Protestant textile workers were shot shot dead in an IRA attack near the Co Armagh village of Kingsmill in 1976. Photograph: PA

An ongoing failure by An Garda to disclose its files on the killing of 10 workmen in Co Armagh almost forty years ago, despite a pledge from the Taoiseach, is bordering on disgraceful, Belfast Coroner’s Court has been told.

Lawyers for those bereaved by the Kingsmill murders in 1976 on Monday heavily criticised officials in Dublin for not passing over the Garda documents, over two months after Enda Kenny publicly committed to the handover.

Fiona Doherty QC, who represents the sole survivor of the attack Alan Black, was scathing in her assessment after the coroner’s court was told the Chief State Solicitor’s office in the Republic had written to say it was not in a position to give a date for disclosure.

“This is a matter of deep regret,” she said. “It is bordering on disgraceful that An Taoiseach’s commitments have been allowed to fall by the wayside.”

She said Mr Kenny’s pledge had raised “considerable expectation” among the families.

“Those expectations to date have been dashed,” she said.

The murders, which were widely blamed on the IRA, though the organisation never admitted responsibility, involved a cross-Border element, with the vehicle used by the killers both stolen and then dumped in Co Louth.

Mr Kenny’s remarks seemed to end months of uncertainty over whether the new inquest would be able to access the potentially crucial Garda papers.

Barrister Neil Rafferty, acting for Beatrice Worton whose son Kenneth was killed, told coroner John Leckey that without the Garda files the inquest could only investigate “half of the story”.

“My clients and other families met An Taoiseach in March and face-to-face, eye-to-eye were told this material would be looked at, it would receive full co-operation and it would be with your office within two weeks,” he said.

“Quite simply my elderly clients can’t reconcile what someone like An Taoiseach says and the correspondence that your officials have received from the solicitors in Dublin.

“We can’t reconcile that at the highest political level we are told this will receive full co-operation yet when it gets to the official solicitor’s offices not one paper clip, not one sheet of paper, has made its way North.”

Mr Rafferty said his clients did not blame Mr Kenny.

“There is the political will at the highest level to co-operate,” he said. “But at a lower level there seems to be an inexplicable delay in co-operating.”

Mr Leckey, who in March welcomed Mr Kenny’s statement, said the Taoiseach would not have made such comments lightly.

“When the Taoiseach said what he said it wouldn’t have been off the cuff remarks, they would have been considered,” he said.

The latest letter from the lawyers in Dublin who are handling the disclosure said “outstanding issues” still had to be resolved before a date for handover could be fixed.

Mr Leckey told his legal representatives to request that the Chief State Solicitor’s office provide a firm timetable by the end of the month.

He said if none was forthcoming, he would consider raising the issue with Northern Ireland Secretary Theresa Villiers in a bid to resolve it with dialogue between the two governments.

The protestant textile workers were shot dead after a masked gang stopped their minibus close to the Co Armagh village of Kingsmill as they were travelling home from work.

They were forced to line up alongside the van and ordered to divulge their religion. The only Catholic worker was told to flee the scene while the 11 remaining workers were shot, with 10 dying from their injuries.

Mr Black, who survived despite being hit 18 times, was in court on Monday.

No one has been convicted of the murders.