Just 4% of bikes stolen in Dublin are recovered - survey 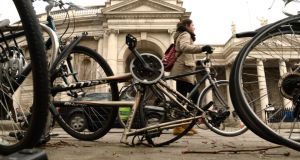 The Dublin Cycling Campaign is calling for the establishment of a working group co-ordinated by Dublin City Council to develop a scheme to reduce bike theft in the city. File photograph: Cyril Byrne/The Irish Times

Trinity College Dublin is the worst place to park a bicycle outdoors in the city, according to a bike theft survey by the Dublin Cycling Campaign.

Some 96 per cent of bicycles stolen in Dublin are never recovered, and one in six victims of bicycle theft give up cycling, the survey of more than 1,500 cyclists found.

While significant numbers never cycled again, at 16 per cent, a further 26 per cent who did buy another bike cycled less often following a theft.

However, one in 10 people who had their bicycle stolen said they had not locked it and just 15 per cent had insured their bicycles.

Most bicycles were stolen from car parks, according to respondents, followed by homes and on the street.

“We were surprised by some of these results, but not by others,” said Dublin Cycling Campaign researcher David Timoney.

“Like most people, we assumed that the street was the most risky place to leave your bike, not car parks or at home. This type of data is very useful and will help us work with An Garda and the City Council to deal with the specific nature of the problem in Dublin.”

The campaign is calling for the establishment of a working group co-ordinated by Dublin City Council to develop a scheme to reduce bike theft in the city; an increase in secure bicycle parking throughout Dublin; more action by the gardaí to detect and deter bicycle theft; a tighter code of practice for on-line buyers and sellers of second-hand bikes; and more responsibility taken by cyclists through buying better locks, recording frame numbers, not buying stolen bikes and always reporting stolen bikes to gardaí.

As a long-term goal, the campaign wants the establishment of a State co-ordinating body on bike theft, to operate an agreed system to reduce bike theft.

“A co-ordinated, multi-agency plan to tackle bicycle theft is required if we are to reach the Government target of 10 per cent of journeys by bicycle by 2020,” Keith Byrne, campaign chairman said.

A Garda spokesman said that despite the low level of bicycles recovered, it does take bike theft seriously.

“We investigate any report of bike theft. People steal bikes to make money so we would ask anyone buying a second-hand bike to make sure they buy from a genuine seller,” he said.

For tips on how to avoid bicycle theft, see dublincycling.ie