Highest claim was more than €44,400 for travel, subsistence and incidentals 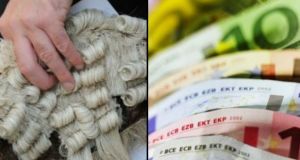 Judges expenses for the first six months of the year were down marginally on the same time in 2018.

The country’s judiciary — which recently received a pay increase — claimed over €1 million in expenses for the first six months of this year.

New figures released by the Courts Service show the country’s judges received €1.02 million in expenses between January and June, down marginally on the €1.088m received in expenses for the corresponding period in 2018.

The judge to receive the highest amount in expenses is unassigned Circuit Court judge, Judge Francis Comerford who received €44,476 between January and June this year, almost double the amount received by the second highest claimant.

His claim is made up of €29,410 in subsistence, €13,786 in travel and €1,279 in incidentals that can be spent on judicial attire. Much of his expenses related to travelling from circuit to circuit around the country as he is one of a high number of judges who are unassigned to any particular circuit or district. The Courts Service has also said some expenses claims include arrears.

Separate Department of Finance figures show that the salary bill for the judiciary last year totalled €26m, down on the €26.79m paid out in 2017.

However, salaries will increase this year following Government sanctioned pay increases in April.

As a result, the salary of the Chief Justice Frank Clarke has increased to €256,584 per year while Peter Kelly, the President of the High Court, will be paid €238,257.

During the financial crash, judges were subject to three separate pay cuts under the Financial Emergency legislation — the pension levy, a 15 per cent pay cut, and then another 10 per cent pay cut.

In terms of expenses, District Court judges claimed €577,434 for the first six months with their colleagues in the Circuit Court receiving €367,626 between January and June.

The circuit and district court judges receive the highest expense payments due to the scale of travel involved in their work covering courts across the country.

1 Luke ‘Ming’ Flanagan bares his bottom half to European Parliament
2 Gardaí investigate Dublin Black Lives Matter protest over Covid-19 rule breach
3 Trump turns to bible for photo op as DC burns around him
4 Miriam Lord: Not a bare ankle, hairy knee or a Ming the Trouserless to be seen at Covid committee
5 Over 200 contracted Covid-19 while in hospital for other conditions
Real news has value SUBSCRIBE