Hundreds turned out in Ballymun to pay their respects to 16-year-old Josh Dunne who died in East Wall on Tuesday night. 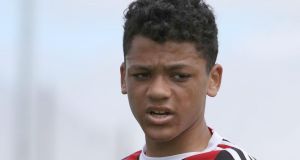 Gardaí investigating the murder of Josh Dunne (16) have arrested a man for questioning. The suspect was arrested in Dublin on Thursday evening and has been taken for questioning to Store Street Garda station in Dublin’s north inner city.

The man, a Brazilian national, was being held under section 4 of the Criminal Justice Act and can be questioned by detectives for up to 24 hours without charge.

Investigating gardaí had earlier on Thursday visited a number of addresses in Dublin seeking to speak to people of interest in the case as they continued to look for the knife used in the attack on East Road, East Wall, Dublin, at 9.20pm on Tuesday.

As the investigation was continuing on Thursday, two other, unrelated, knife attacks occurred in different parts of north Dublin.

A man in his 50s was left seriously injured after being stabbed outside the Elphin Pub in Baldoyle, Dublin 13, at 1pm and a suspect was arrested by Clontarf gardaí.

At 4.30pm a man in his 30s was stabbed at Seville Place, Dublin 1, less than a kilometre from where Josh Dunne was fatally injured.

The fatal stabbing of Josh, the stabbing attack on the man in Seville Place and a serious stabbing in Dublin’s IFSC last week that left a woman critically injured all occurred in the Store Street Garda station district.

Garda sources said it was very unusual for four serious stabbing attacks to occur in such close proximity within days. However, they stressed none of the attacks was in any way linked and while three were being investigated by Store Street gardaí, they were three separate inquiries.

Josh’s mother, Diane, was among at least 800 people who gathered on Thursday afternoon at Coultry Park, Ballymun, close to where Josh lived, for a remembrance event. Josh’s teammates from St Kevin’s Boys soccer club were also present, many of them overcome with grief. Hundreds of balloons were released and flares lit at the event.

Many of those present wore the orange and black colours of St Kevin’s while others wore T-shirts featuring a picture of Josh playing for Bohemians under-17s in 2019.

A statement issued by Ms Dunne and the rest of her family described him as “an amazing, happy and talented boy who was tragically taken from our lives at just 16 years old”.

“Josh’s smile lit up every room he walked into, and he had a promising career ahead of him on the football pitch,” his family said.

They would “always remember our Josh as a happy, caring and amazing boy” and a “dreamer and a doer”. The family thanked the community in Ballymun for their support and asked the media “to let us grieve in peace”.

Detectives suspected from the start of the investigation that two men carrying out food deliveries in East Wall just before Josh was stabbed had information that could prove crucial to solving the case.

Those two men, both foreign nationals, tackled another man, a Dubliner in his 20s, stealing a bike on East Road on Tuesday night. It appears they tried to stop that man as the bike he was stealing was owned by another delivery cyclist.

It appears Josh and other teenagers intervened in the row and during the course of doing so two of them were stabbed. While both boys were treated at the scene by paramedics, Josh later died from stab wounds after being taken to the Mater Hospital.

The other injured boy (16) has since been discharged from the hospital. A man (23) presented at the Mater later on Tuesday night, for injuries sustained in the incident in East Wall, and he has also been discharged.