Is a referendum needed to introduce same-sex marriage?

Experience from other countries shows that there are many ways to achieve marriage equality, and the referendum is rarely one of them 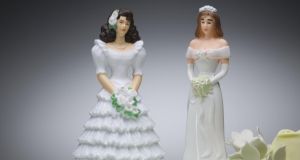 Should same-sex couples be allowed to legally marry on an equal basis to opposite-sex couples? This is one of the foremost legal and political controversies in Ireland today. However, bound up with the question of what to decide is a related legal and political controversy: who gets to decide? The people, their elected representatives, or the courts?

In Ireland, it seems that the people will ultimately make the decision by way of a referendum some time in 2015. However, experience from other countries shows that there are many ways to achieve marriage equality, and the referendum is rarely one of them.

The two main vehicles for advancing the cause of marriage equality around the world have been courts and parliaments. Courts have long been the refuge of minority groups seeking to pursue a right that is denied to them. Since judges are charged with protecting individual rights without regard to popular opinion, oppressed or unpopular minorities can sometimes achieve legal change through constitutional litigation that might not have been possible through lobbying or electoral pressure.

Court decisions provided the catalyst for marriage equality in South Africa and several Canadian provinces, and an increasing number of states in the US are following suit. Massachusetts was the first in 2004, followed by Iowa, California, New Jersey and New Mexico. More recent pro-marriage equality decisions in Utah, Oklahoma and Virginia have been stayed pending appeal.

Parliaments are perhaps less suitable than courts for protecting minority rights, since their members need to win as many votes as possible to be re-elected. Yet the need to appeal to a wide spectrum of voters, to bargain with coalition partners and to engage in debate and deliberation tempers the purely majoritarian tendencies of parliaments. It also renders it more difficult to advance a position based on prejudice or animus, and requires more rational justifications to be offered.

As advocates for marriage equality have gained allies, they have won parliamentary votes in 14 countries (including the UK, New Zealand, Canada, France, Spain and Portugal) and in 12 US states, often by significant margins.

Referendums, by contrast, involve little by way of compromise, and require no moderation in one’s views. Instead, they offer a binary yes or no choice, and allow people to advocate on either side in whatever language they choose to use, temperate or intemperate. The result can be hostility and polarisation – hardly an ideal climate in which to decide on sensitive issues.

Even though the Irish referendum is still one year away, there is already ample evidence of this phenomenon, as protagonists have traded accusations, insults and solicitors’ letters. The contrast with the respectful tone evident when the matter was discussed at the Constitutional Convention last year is palpable.

For 20 years, referendums proved an insurmountable obstacle to marriage equality. Constitutional amendments restricting marriage to opposite-sex couples were approved in 30 US states, as well as countries like Croatia.

However, this trend has shown recent changes. In November 2012, marriage equality came out on the right side of referendums in Maine, Maryland and Washington (Maine actually reversed the result of a poll held just three years previously). If opinion polls prove to be correct and the marriage equality referendum passes next year, Ireland will be the first country in the world to do this at national level.

Constitution
Ireland may thus become an unlikely trailblazer in the history of marriage equality worldwide. The irony is that a referendum is probably not strictly necessary. While many assume (and politicians regularly state) that our Constitution restricts marriage to opposite-sex couples, it is actually silent on the definition of marriage.

Of course, when drafted in 1937, opposite-sex marriage was what was understood – but our courts have long accepted that the Constitution falls to be interpreted not by reference to 1937 standards, but by the standards of the present day. So, while the High Court rejected Katherine Zappone and Ann Louise Gilligan’s argument in 2006 that the term “marriage” in Article 41 included same-sex couples, it accepted that consensus on the meaning of marriage was a relevant factor in interpreting that provision.

Nonetheless, this decision is frequently cited as evidence of the inability of the Oireachtas to legislate for marriage equality without first holding a referendum. It has suited politicians to adopt a pro-marriage equality stance while passing responsibility for eventual reform to the Constitutional Convention and the electorate. The disadvantage is that we are likely to see a divisive and unpleasant referendum campaign.

However, if the amendment passes, Ireland will achieve something truly historic and durable by becoming the first country in the world to approve a national referendum expressly guaranteeing marriage equality in its constitution.