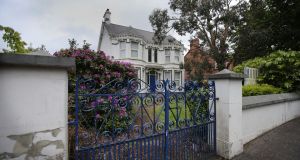 File photo of the former Kincora Boys’ Home on the Upper Newtonards Road, Belfast. A long-running public inquiry has reconvened into allegations of abuse there in the 1970s and 1980s. Photograph: Niall Carson/PA Wire

The North’s Historical Institutional Abuse inquiry on Tuesday began investigating the “extraordinary allegations” that elements of the British state colluded in the abuse of children at Kincora Boys’ Home in east Belfast.

The inquiry, among a number of matters, is trying to determine whether there is any truth to allegations that elements of the British secret services were implicated in facilitating a paedophile ring to operate at the boys’ home during the Troubles.

In 1981 three senior staff — William McGrath, Raymond Semple and Joseph Mains – were imprisoned for abusing 11 boys. Now the inquiry is investigating allegations that organisations such as MI5 and/or MI6 may have facilitated the abuse of children for blackmail purposes during the Troubles in the 1970s and early 1980s.

Junior counsel to the inquiry, Joseph Aiken, in providing an overview of the Kincora allegations said that the inquiry would also examine allegations that the late and former head of MI6, Sir Maurice Oldfield abused boys at Kincora.

Sir Maurice Oldfield was sent to Northern Ireland in 1970 by the then British prime minister Margaret Thatcher to co-ordinate security and intelligence operations.

More generally, the inquiry is investigating whether the security services exploited Kincora to blackmail purported politicians, business people, members of the legal profession and others who allegedly were abusing children from Kincora.

Mr Aiken said it was important to either substantiate the “extraordinary allegations” surrounding Kincora or else to prove they were wrong and allay public concerns about state collusion in the abuse, and prostitution and blackmail. Mr Aiken said the inquiry was seeking to establish if elements of the British state “deliberately” and “cynically” facilitated the “abuse of children” at Kincora.

The inquiry’s Chairman, Sir Anthony Hart, a retired senior High Court, said this stage of the inquiry would examine “the nature and extent of sexual abuse perpetrated on residents of Kincora, abuse that resulted in the arrest, conviction and sentence of Mains, Semple and McGrath”.

“The Inquiry will investigate whether there were systemic failures to prevent such abuse on the part of those responsible for the management of Kincora, or on the part of other state entities,” he added.

Sir Anthony said that the Royal Ulster Constabulary, MI6, MI5, the British Ministry of Defence, the Northern Ireland Office and the Belfast County Borough Welfare Committee and Department, and its successor, the Eastern Health and Social Services Board, would be investigated.

Organisations such as the PSNI, MI5 and MI6, the Ministry of Defence and the NIO have legal representation at the inquiry. It is not yet clear whether anyone from MI5 or MI6 will give evidence to the inquiry.

Sir Anthony said the inquiry would investigate whether members of these organisations or bodies knew of the abuse, what they knew, when they knew, what did they do with any knowledge they had, and what should they have done with that knowledge.

“There is a suggestion in this case that children in Kincora were abused and prostituted in order to satisfy the interests of national security. If that is true it must be exposed,” said Sir Anthony.

“As a society we must not repeat the errors of the institutions and should remember our obligations to the children. If the suggestion is not true the rumour and suspicion surrounding this should be allayed,” he added.

Sir Anthony also referred to how Roy Garland, a former Ulster Unionist Party member and Irish News columnist who was involved in initially helping to expose the abuse at Kincora had declined a request to give evidence to this inquiry. He also referred to two former British intelligence officers, Colin Wallace and Brian Gemmell, who have also made allegations about abuse at Kincora, but who also declined to give evidence to the inquiry.

Sir Anthony said that it was believed that Mr Garland, Mr Wallace and Mr Gemmell could give “relevant evidence” to the inquiry. “We are not dependent upon their evidence, and their refusal to co-operate or answer our questions will not prevent us from carrying out our investigations,” he said. “Nevertheless, if even at this late stage any of them decides to assist the inquiry by providing answers to the questions we have asked, the Inquiry will enable them to do so and involve them in the Inquiry as core participants.”

Sir Anthony noted how some concerns have been expressed by some that the ability of this inquiry to investigate matters relating to Kincora is handicapped by the absence of powers of compulsion. “The inquiry has powers of compulsion which it does not hesitate to rely on if necessary,” he said.