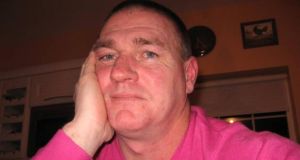 Human remains have been found during excavation work near Kells, Co Meath have been identified as Gerard Daly. Photograph: Appeal for Missing Gerry Daly/Facebook

Human remains have been found during excavation work near Kells, Co Meath have been identified as Gerard Daly.

The discovery of the Mr Daly, who was 42 when he went missing, was made in Oristown bog on Thursday.

Originally from Knockmore Grove in Tallaght, Mr Daly was well known to dog enthusiasts and breeders.

A man in his 50’s was arrested on the March 11th, 2013 in connection with the missing person investigation. He was released the next day without charge.

At the scene at Oristown Bog on Thursday, a burnt out shell of a car was also recovered.

It is understood the car was reported stolen in the Kells area in 2003.

The remains were brought to a mortuary at Our Lady’s Hospital in Navan.

As the investigation continues, gardaí said further updates would follow.

A garda spokeswoman said the discovery was not connected to recent searches for “the Disappeared” victims in the area.