How many people died on roads because of Garda breath test falsifications? 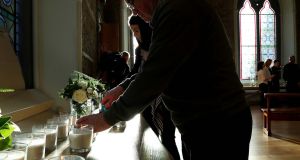 Relatives of those who have lost their lives in road traffic accidents light candles at the Road Safety Authority World Day of Rememberance. Photograph: Robbie Reynolds.

A road safety campaigner has expressed anger over the falsification of breath tests by members of An Garda Síochána and asked how many people died as a consequence.

Mary Clinton from Donegal, who lost a friend and a relative in fatal collisions, said she had been left “disillusioned” by the controversy in which some 1.5 million breath tests that never happened were recorded as having taken place.

“I am very angry, very annoyed, very disappointed, very disillusioned and very discouraged as a campaigner all these 13½ years to hear that the gardaí, that we look up to and respect and expect to uphold the law . . . that they’ve actually been falsifying breath tests,” she said.

“I thought to myself how many people have been killed because of these falsifications? It really, really upset me as a campaigner.”

Ms Clinton was speaking as the families of about 30 families of individuals killed on the State’s roads gathered in Dublin’s Smock Alley Theatre ahead of World Day of Remembrance for Road Traffic Victims on Sunday.

More than 24,000 people have died on Irish roads since records began in 1959, and crashes have caused almost 80,000 serious injuries over the same period.

There was a performance from the Dublin Gospel Choir and candles were lit in memory of the deceased.

“It is a very emotional, very, very touching event. I could feel the tears welling up in my eyes just thinking of my best friend, very young that she was, and my uncle who was so special to me,” said Ms Clinton, who established the A-Ceart group in Co Donegal some 13 years ago to advocate on road safety issues.

Road Safety Authority (RSA) chief executive Moyagh Murdock said the breath-test controversy was a “real body-blow” to people affected by road collisions and that public confidence in An Garda Síochána must be rebuilt over the Christmas period and beyond.

“To hear that [gardaí]weren’t actually conducting the tests that they said they were caused a lot of trust issues, and they have to address that.”

Ms Murdock said road deaths were down by 32 when compared to this time last year.

RSA employee Catherine Flaherty read a poem dedicated to the memory of her sister Delia who died in a car crash.

Leo Lieghio said the reason he was present was “because of Marsia,” his 16-year-old daughter who died after a hit-and-run in Dublin in 2005.

“We’re just trying to save other people from going through what we’ve gone through. We don’t want to see this to happen to anyone else because these deaths are preventable if people just slow down and think,” he added.

Mr Lieghio said he had been following the progress of a new Bill introduced by Minister for Transport Shane Ross which proposes that anyone caught driving after drinking would be disqualified for a minimum of three months.

He said it was disheartening to hear public representatives such as Independent TD for Kerry Danny Healy-Rae defending such behaviour.

“When you hear statements like that, you just take it with a pinch of salt. It’s absolutely ridiculous and anybody who takes note of it is just as bad,” he said.

Mr Ross was also in attendance and told reporters that his Bill would “send a clear message that nobody can drive over the limit without being disqualified”.

He said the bereavements remain raw for relatives who gathered to mark the occasion, and that the ceremony provides them with a “great deal of comfort”.

A series of events marking World Day of Remembrance for Road Traffic Victims are scheduled to take place across the State on Sunday.

Coronavirus craft: ‘The virus is so beautiful and so sinister’ 00:48
Rise in temperatures unlikely to kill off coronavirus 00:41
Coronavirus: Government to extend restrictions for at least two weeks 00:05
Coronavirus: Ireland will have to ‘live alongside the virus’ 00:01
Three chances to be given for breaching coronavirus restrictions this weekend 00:01

1 Chief medical officer urges people not to visit hardware stores
2 Coronavirus: Government to extend restrictions for at least two weeks
3 Impact of coronavirus ‘overwhelming’ in Republic but for public-health controls
4 Coronavirus: Ireland will have to ‘live alongside the virus’
5 ‘When I look at the viral loads we find in elderly people, it is mind boggling’
Real news has value SUBSCRIBE