How Harry Gleeson was wrongly hanged for murder in 1941 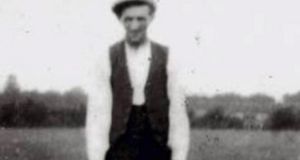 Harry Gleeson: part of the prosecution’s case was that he had fathered one of Moll McCarthy’s children and had killed her to silence her

Character evidence paints two very different pictures of the farmer wrongfully hanged for murder in the 1940s. Harry Gleeson was convicted and sentenced to death for murdering Mary “Moll” McCarthy, a single mother of seven, whose body he found in his uncle’s Co Tipperary field in November 1940. She had been shot twice in the face. He was executed five months later, in April 1941.

The Government will grant the State’s first posthumous pardon after barrister Shane Murphy reviewed the case and found the conviction was based on unconvincing circumstantial evidence. The Government has apologised for the execution.

The review found that gardaí and the prosecution withheld crucial evidence at trial, including a statement showing that gardaí fabricated evidence against Gleeson to prejudice the jury.

While the formal review came after submissions by the Irish Innocence Project and the Justice for Harry Gleeson Group, Bernadette Gorman also sent evidence to the Government. She took an interest in the case because of the impact it had on her father Billy, Mr Gleeson’s close friend.

Her evidence included a letter by Fr John Kelly, a chaplain at Mountjoy Prison, written on the day of the execution. It was addressed to Anna Cooney, a local woman who helped McCarthy with her children and had visited Gleeson in prison. It originally came from Cooney’s family, but Ms Gorman found it in papers belonging to Marcus Bourke, author of the 1993 book Murder at Marlhill.

Fr Kelly described Gleeson’s last moments: “Before I saw him there was a stream of visitors as Warders called in to wish him farewell; the Governor was last and then I had a short chat with him.”

They prayed together before Gleeson was sent to the gallows. “He answered these bravely right up to the end and I think his last words were ‘My God, I love you.’ He has promised not to forget us who are left here below and to help us when our time comes.”

The Minister for Justice’s office sent Ms Gorman a letter last week. According to it, Mr Murphy said the chaplain’s note “seems to portray Mr Gleeson in a very different light to the assessments made by Superintendent Mahony in his letter to the department of justice”.

Supt Mahony was a garda who investigated the case in the 1940s. He sent a letter about Gleeson’s character to the department of justice, which was considering a reprieve. “That Gleeson is the type of man capable of committing this crime, there can be no doubt. He is possibly something of a sadist,” Mahony wrote.

A key part of the prosecution’s case was that Gleeson fathered one of McCarthy’s children and killed her to silence her. Gorman’s father had a corn harvesting venture with Gleeson. They worked long hours together from August through October 1939, often sleeping in the same room. McCarthy’s child would have been conceived during this time.

The only time Gorman’s father ever spoke to her about the case, he said: “I can tell you, if Harry Gleeson fathered that child, there must have been two Harry Gleesons.” However, he was never called to testify at trial.

“My father was at the trial, and he was a crucial witness and he was silenced. He never got over it,” she said*.

Mr Murphy was “perplexed” by the defence lawyer’s decision not to call her father as a witness but did not have enough information to assess the rationale behind it, according to the letter by the Justice Minister’s office. It also said the prosecution’s file noted her father was a necessary witness.

* This article was amended on April 8th.