How cyberpsychology can help to hold back the cyberferal tide

Psychologist Mary Aiken, soon to be played by Patricia Arquette in a new TV series about cybercrime, fears that technology could be leading us rapidly to a dystopian future 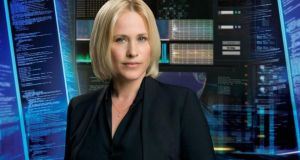 Patricia Arquette as Mary Aiken in the new TV series CSI: Cyber, which is ‘an incredible platform to educate and inform’ viewers about the role of digital forensics, according to Aiken

“Criminals will do things online because there’s a perception that nobody’s in charge. And guess what? That’s because nobody’s in charge . . . No wonder we’re seeing ‘cyberferal’ behaviour in this environment.”

Psychologist Mary Aiken specialises in forensic cyberpsychology, which encompasses everything from cybercrime and criminal profiling to child welfare in cyberspace.

She talked about the impact of technology on crime at the Irish Criminal Bar Association conference on cybersecurity. Aptly titled Was Orwell an Optimist?, the conference gave us a look at our possible dystopian future.

Aiken directs the Cyberpsychology Research Centre at the Royal College of Surgeons in Ireland and is an academic adviser to the Europol Cybercrime Centre. She was also co-leader of a White House research team focused on tackling technology-facilitated human trafficking.

While Aiken’s work has taken her from Europol to the White House, it has most recently taken her to network television.

Patricia Arquette plays her in CSI: Cyber, a new series based on her work, which originally aired on US network CBS and will come to RTÉ this month. Aiken herself is a writer and producer on the programme.

Initially reluctant to have a television show based on her work, she decided ultimately that it was “an incredible platform to educate and inform” about the role of digital forensics.

“Now, we know that baby cams can be hacked,” says Aiken. “The next evolution would be to put them on the deep web and up for auction. The point is not that you shouldn’t use a baby cam; the point is that if you can log in remotely and see your child while you’re working in London, and your password is not secure, then anyone else can log in.

“Really, it’s to stop people and force them to think about what they’re doing. If you’re doing it, other people can do it.

“Cyberfacilitated crime is a growing problem, in everything from online sexual exploitation to cyberterrorism.”

And people, including criminals, behave differently online from the way they do in the real world, which raises new issues for law enforcement.

“As a cyberpsychologist, I would fundamentally believe that behaviour mutates in a virtual context,” says Aiken. “We see traits like anonymity, online disinhibition . . . I think in a couple of years’ time, you are going to see online disinhibition used as a defence. It’s as powerful and intoxicating as alcohol.”

Technology amplifies a criminal’s underlying disposition, Aiken says. Someone with sadistic tendencies becomes even more sadistic online, under the cloak of anonymity and in a forum where they can meet likeminded people easily.

“My theoretical prediction is there is going to be a rise in the general population of criminal deviant behaviour [because of those things],” she says. “I hope I’m not right, but it I think it’s likely the case.

“We also see how victims and offenders may find each other, [and the Graham Dwyer case] is a good example of that.”

While real-world criminal behaviour is reasonably consistent, in a cyberspace context both technology and behaviour are evolving, she says. Psychological profilers, who must look at data and paint a picture of an individual, are now dealing with a “complex matrix” of criminal behaviour facilitated by technology.

“Are you the same person on Facebook as you are in LinkedIn? I don’t think so,” Aiken says. Likewise, criminals do not behave the same way across platforms.

But she says that, in general, perpetrators of cybercrime need “technical knowledge, a certain disregard for the law, a control-freak-type nature, and motive. Motive can be anything from political to religious to sexual to boredom, or in certain cases the desire just to have fun.”

“I think from a legal perspective, we ought to think about the future of prosecution, when there may be little real-world forensic evidence. There may be digital evidence, but there will be no eyewitnesses.

“I would argue that in an age of ubiquitous technology, where everybody has a mobile phone, more or less . . . it would be almost impossible in the developed world to commit a crime without a cyber element.”

She thinks the origins of cybercriminality should be studied, so that interventions can be put in place. By way of example, she pointed out that Ireland saw a large increase in the rates of cyberbullying recently. She also says that 10 per cent of parents say their three- to four-year-olds know more about technology than they do. “These are the statistics that really worry me,” she says.

She is worried about the possibility that child cyberbullies might become adult cyberstalkers, and that lack of online supervision might contribute to that.

“What do they look like in their 20s and 30s?” she asks. “We don’t know, but they’re certainly going to have a different moral compass than anyone in this room. So in terms of more serious threats, I’m worried . . . about the developmental effects of spending large amounts of time in a deep web context for young people.”

She said humans are becoming more immersed in cybersystems, which will have a psychological impact on everyone.

“If you think you have a problem with your kids at the moment using mobile phones at the dinner table, wait until they turn up wearing HMDUs [head-mounted display units, or oculus rifts],” she says. “It’s the next evolution. They’ll be on the market in two years’ time, a full helmet. You won’t be able to see their faces.