How Bertie Ahern story turned into drawn-out row on sources

Case will now return to Dublin for costs to be determined 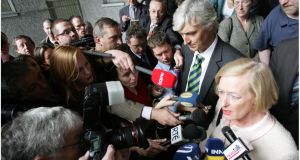 Then editor of The Irish Times Geraldine Kennedy and Irish Times journalist Colm Keena at the Mahon tribunal in Dublin Castle in 2006. Photograph: Bryan O’Brien

On September 21st, 2006, The Irish Times ran a story on its front page under the headline “Tribunal examines payments to Taoiseach”. The report, by its public affairs correspondent, Colm Keena, revealed that three or four people had been contacted by the Mahon planning tribunal concerning payments totalling €50,000 and €100,000 to then taoiseach Bertie Ahern in or around December 1993.

The story caused a sensation. Four days later, the tribunal issued an order directing Keena and then Irish Times editor Geraldine Kennedy to hand over all documents on which the article was based

Kennedy replied on the same day that the material had been destroyed. In any event, she disputed the right of the tribunal to make such an order, claiming it jeopardised the primary obligation of editors and journalists to protect their sources and it was in the public interest that this obligation and right be protected.

Appearing before the tribunal a number of days later, Kennedy and Keena explained that the documents had been destroyed and declined to answer any question which they believed might lead to the identification of the source of the information.

The tribunal did not have any power of sanction, so its response was to apply to the High Court so as to compel the two journalists to comply with its orders. Its primary concern, it said, was to protect the integrity of its inquiries.

When the case came before a three-judge High Court the following year, the tribunal prevailed. Ordering the journalists to reveal the source of the article, the High Court said the paper’s privilege against disclosure of sources in this case was “overwhelmingly outweighed” by the need to preserve public confidence in the tribunal.

The Irish Times appealed that decision to the Supreme Court, and there, in July 2009, the lower court’s decision was overturned. The unanimous judgment, delivered by Mr Justice Nial Fennelly, said the High Court had erred in how it balanced the rights of journalists not to disclose their sources against the need of the tribunal to investigate the source of leaks. It had attached “great weight” to the “reprehensible” conduct of the two journalists in destroying the documents.

The Supreme Court said it was very difficult to see any sufficiently clear benefit to the tribunal from any answers to the questions they wished to ask the two journalists that would justify making the order.

The judgment was hailed by the press as a landmark on the issue of protection for journalists’ sources. For The Irish Times, however, there was to be a painful sting in the tail.

Four months after its judgment, the Supreme Court ruled that the paper would have to pay the costs arising from its successful appeal.

The courts do not normally award costs against the winner, but they have the discretion to do so, and in this case the Supreme Court believed there were “exceptional circumstances” to justify it – namely, the destruction of the documents.

By that act, said then chief justice John Murray, the journalists had “cast themselves as adjudicators of the proper balance to be struck between the rights and interests concerned”.

In taking an application to the European Court of Human Right, Kennedy and Keena complained, under article 10 of the Convention on Human Rights which concerns freedom of expression, that the decision on costs was an interference with their right to protect their journalistic sources. They also argued that they did not have an effective remedy for their complaints under the convention, that the costs order breached their property rights and that they had been subjected to an unjustified difference in treatment compared to people in comparable situations.

The newspaper claimed there was a strong chilling effect to the Supreme Court’s decision on costs, since it was clear to the press, to potential sources and to the public that journalists could be compelled, under the threat of an order of costs, to disclose the source of information given in confidence.

It said this was all the more unacceptable in light of the highly political subject matter of the case, which warranted the highest protection. The government disputed the paper’s claims.

In a majority decision, the Strasbourg court rejected the newspaper’s application and found the claim of interference with freedom of expression to be “manifestly ill-founded”.

“The convention does not confer on individuals the right to take upon themselves a role properly reserved to the courts,” the court stated.

“As the domestic courts underscored, this is, effectively, what the applicants did through their deliberate destruction of the very documents that were at the core of the tribunal’s inquiry.”

The court disagreed with the newspaper’s complaint of the chilling effect of the costs order on freedom of expression. It said the ruling could have “no impact on public interest journalists who vehemently protect their sources yet recognise and respect the rule of law.”

The case now returns to Dublin, where the Taxing Master will make a determination on the costs to be paid.

June 29th 2006: The Mahon tribunal writes to a businessman and David McKenna, a friend of then taoiseach Bertie Ahern, regarding receipt of funds by Ahern around December 1993 when he had been minister for finance. The tribunal asks who requested payment and why it was required. Solicitor responds.

September 19th, 2006: A copy of this exchange of correspondence is delivered unsolicited and anonymously to Irish Times journalist Colm Keena. He confers with then editor Geraldine Kennedy who advises him to work on the story and authenticate the materials.

September 21st, 2006: The Irish Times publishes a front page article by Keena headlined “Tribunal examines payments to Taoiseach”. The article relates the contents of the correspondence, and reports that a number of people have been contacted by the tribunal about payments to Ahern.

September 25th, 2006: The tribunal orders Keena and Kennedy to hand over all documents upon which the article was based. Kennedy replies that the relevant material has been destroyed.

September 26th, 2006: The tribunal serves summonses on Keena and Kennedy, directing them to attend and hand over copies of all documents received.

September 29th 2006: Keena and Kennedy attend the tribunal. Keena states that he has destroyed the documents at Kennedy’s request and that he considered this a matter of professional duty.

October 23rd, 2007: The High Court rules the decision taken by Keena and Kennedy to destroy the documents was “an astounding and flagrant disregard of the rule of law”.

November 26th, 2009: The Supreme Court directs the newspaper to pay all costs of the court proceedings.

October 23rd, 2014: The Irish Times loses its case at the European Court of Human Rights over the decision to award costs against the newspaper.

Nphet says normal life ‘some way off’ and vaccination unlikely to fully halt Covid-19 13:46
Health staff will not be offered choice of Covid-19 vaccine – HSE 13:43
Covid-19: Catholic bishops call on all to support vaccination programme 13:14
Family of woman who died from cervical cancer settles case 12:52
Covid-19 Vaccine Tracker: What's available in the Republic of Ireland and what else is coming? 11:57