Heartbroken mother says Driver should have received at least 10 years

Victim’s mother dismisses sentence as a ‘kick in the teeth’ 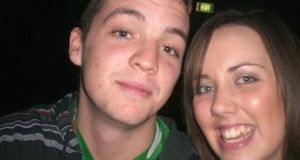 The mother of one of the victims, the late Kiara Duncan, dismissed yesterday’s sentence as a “kick in the teeth”, saying her heart was broken at the thought two young lives could be worth just under three years in prison.

“That is getting away with it scot free,” Audrey Duncan said last night after hearing about the sentencing of Eamonn Driver.

“He will get out in 18 months time and his family will meet him at the airport and welcome him home with open arms. Does anyone realise that when my daughter came home she came home in a hearse?”

Ms Duncan, who has no other children, said Driver should have received at least 10 years for killing two people, as he had been drinking beforehand and broke a red light just before the crash.

Kiara had only been in Australia for

10 weeks before the crash that also claimed the life of Colm Reilly.

Her best friend Róisín was also in the car and missed Kiara’s funeral because she was in hospital.

“She was my only child. In a situation like this you become a fantastic liar and you wear a false face 24 hours a day,” Ms Duncan said.

“People ask you how you are and you say you are okay and you put a smile on, but when you are on your own there is no smile and there are no lies.”

Kiara was, her mother said, a talented accordion player who won awards with her band. She was a qualified beautician.

She had loved her Australian experience and had found work as a receptionist.

“There wasn’t a bad bone in her body. Her laugh is what people remember her by.”