GSOC at odds with Garda over handling of fatal crash scene 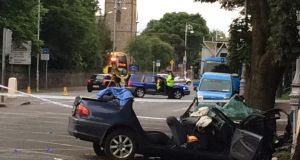 The scene of the crash in Fairview, Dublin.

The difficult relationship between the Garda Síochána Ombudsman Commission (GSOC) and the Garda force has come under renewed strain following a serious dispute about the handling of a road traffic fatality which occurred during a Garda pursuit in north Dublin yesterday morning.

Senior officers in GSOC claim the incident was not formally referred to the organisation until 7.30am yesterday, some 5½ hours after it happened in Fairview, even though GSOC has 24-hour on-call arrangements for such referrals.

1 Kanturk farm shootings: A timeline
2 Ciara Kelly: I was pregnant, unmarried, a junior doctor and I got old-school comments
3 Cork shootings: Postmortems on two of deceased complete with final one due on Wednesday
4 Husband loses appeal to overturn interim barring order
5 Former solicitors ran an ‘identity factory’ in committing fraud – court told
6 ‘Shellshocked’: Outrage in Australia after women on flight strip-searched in Qatar
7 Third person arrested in education board corruption investigation
8 Coronavirus: A further five deaths and 720 new cases reported by Nphet
9 Son (23) who died in suspected Cork murder-suicide was due to graduate
10 Large retailers modify stores and block off non-essential products from customers
11 Cork suspected murder-suicide may have been over disputed will
12 Back to brack: An easy Halloween bake
13 Two hundred Irish retailers for all your online Christmas shopping
14 Woman who lost damages case over ‘thrill ride’ must pay appeal costs
15 Disgraced priest who downloaded child abuse imagery jailed
16 How much state pension will I get next year?
17 Fintan O’Toole: Knock-knock joke on house parties is a Covid charade
18 Essex lorry deaths: victims pleaded for lorry doors to be opened, court hears
19 Cian Healy: ‘Realistically I got away with murder when I was younger’
20 The former Rose at the front line of US Covid-19 fight
21 Deaths of father and sons may have been over disputed inheritance
22 From the past to modernity: images of Ireland transforming
23 The Undoing: Hugh Grant is wonderfully inscrutable as he plays his greatest hits
24 Don McLean on the meaning of American Pie: ‘Who cares, who gives a f**k’
25 Gardaí say 52 people who went missing in 2020 not yet found
26 Hospitals across Europe running out of beds due to ‘runaway’ Covid cases
27 Seán O’Brien: Anger over my parents’ break-up never left me
28 Olivia Newton-John: ‘For me, my cancer has been a gift’
29 Am I crazy to consider switching to an Ulster Bank mortgage?
30 Yellow weather alert issued for west of country
31 Green Party Cllr Lorna Bogue resigns over Mother and Baby Home issue
32 Barcelona president Josep Maria Bartomeu and board of directors resign
33 Lily James: ‘I think I’m too submissive’
34 ‘We can’t risk bringing Covid into our home’
35 Breathe easy to maximise your running experience
36 Almost 20% of staff at Dublin hospital have antibody evidence of Covid-19 infection
37 Housing crisis here to stay in absence of big rethink, industry warns
38 Suspected murder-suicide shooting in Cork leaves father and two sons dead
39 Irish aviation industry will ‘not exist’ without urgent political action, Oireachtas committee told
40 Martin Feeley: Hospital admissions don’t justify pressing the panic button
Real news has value SUBSCRIBE