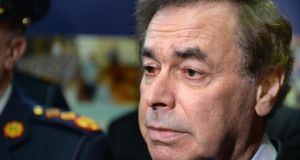 The power to terminate motorists’ penalty points would be taken out of the hands of local Garda officers and centralised under a much stricter system, under sweeping reforms set out by the Garda Inspectorate.

Garda officers from the rank of superintendent and higher would no longer have discretion to cancel points in cases where motorists complained errors had been made or insisted there were legitimate reasons for infringements such as speeding.

Instead only members of the Garda’s fixed-charged processing office in Thurles, Co Tipperary, would have the power to cancel points. Any approaches to them would be logged as would the reasons for their decision making, all of which would be regularly audited.

Minister for Justice Alan Shatter last night said legislation would be needed to provide for the reforms.

The Garda Inspectorate report was due for publication this afternoon after it was brought to Cabinet by Mr Shatter. Last July he requested the Garda reform agency study the points system along with the findings of an investigation into it concluded last year by Assistant Commissioner John O’Mahoney.

Fianna Fail last night said the Inspectorate report vindicated the two Garda whistleblowers Sgt Maurice McCabe and former garda John Wilson who had first raised the issue and whose allegations led to the O’Mahoney process and later the Inspectorate’s review.

The party’s spokesman on justice Niall Collins TD called on Mr Shatter to apologise for previous remarks he made about Sgt McCabe’s alleged unwillingness to cooperate with Garda investigations into allegations he himself had made.

Mr Shatter had also criticised the manner in which the former garda Wilson had raised his concerns about the penalty points system.

“It is a matter of concern that the allegations made by this Garda whistleblower were in many instances seriously inaccurate and without any foundation in fact, or else involved an incomplete understanding of the facts,” Mr Shatter said at the time of the publication of the O’Mahoney penalty points report last May.

The Garda Inspectorate was established eight years ago to review Garda procedures and recommended and oversee policing reform.

The Garda inquiry led by Assistant Commissioner O’Mahony concluded last May and found no evidence of corruption, a conclusion that does not appear to be contradicted by the Inspectorate’s report.

It found a system that was generally working well although some Garda members were suspected of serious abuses of their powers and were criminally investigated with files sent to the DPP. A Garda superintendent and two inspectors were disciplined after they were found to have terminated points in 661cases.

Mr Shatter requested the Inspectorate examine the O’Mahony report, a separate one by the Garda Síochána Professional Standards Unit and also study the fixed charged notice system generally itself and make recommendations for its reform.