Gardaí seize €85,000 worth of suspected methedrone in Co Kerry

Man, who was arrested and charged in connection to the seizure, will appear in court on Friday 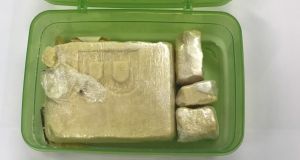 One of the two containers gardaí found with suspected methedrone. Photograph: An Garda Síochana 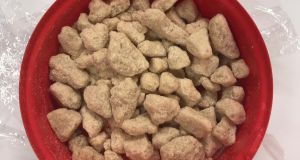 One of the two containers gardaí found with suspected methedrone. Photograph: An Garda Síochana

A man in his 30s has been charged and due to appear before a court in relation to the seizure of €85,000 worth of suspected methedrone in Tralee, Co Kerry.

A search warrant was carried out at a premises on Mary Street at about 8pm on Thursday by gardaí from the Divisional Drugs Unit, assisted by the Tralee Community Policing Unit and the Listowel Detective Unit.

During the search, which was part of an ongoing operation targeting the sale and supply of drugs in the county, gardaí discovered two containers with €85,000 worth of suspected methedrone hidden inside a wardrobe. Gardaí also seized a weighing scales and plastic bags. The suspected drugs will now be sent to Forensic Science Ireland for analysis.

A man, aged in his 30s, was arrested at the scene and was brought to Tralee Garda Station where he was detained under Section 4 of the Criminal Justice Act, 1984.

He has since been charged and is due to appear before Dingle District Court on Friday.