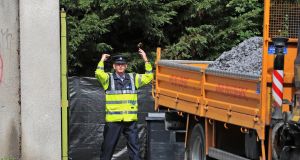 A truck carrying gravel arrives at the scene of the search for the body of Trevor Deely in Chapelizod, Co Dublin. Photograph: Colin Keegan/Collins Dublin

Gardaí searching for the remains of missing man Trevor Deely are prepared to continue searching a site in Dublin well into next month.

Officers leading the inquiry are determined to fully exhaust the information they have received. It purports to know what became of the Bank of Ireland employee who vanished on his way home from a Christmas party in December, 2000.

The three-acre site in Chapelizod, west Dublin, indentified as his burial place has been significantly cleared of trees and other vegetation to allow extensive excavation.

And while the source supplying information to the Garda has claimed Mr Deely’s remains are in a large underground pipe or drain, the search team is prepared for a long dig.

Gardai are working off information suggesting Mr Deely was shot dead by a known criminal that he had a chance encounter with in Dublin’s south inner city.

The man identified as the suspect was active in drug dealing and armed robbery and living off the earnings of prostitution at the time.

Gardaí have been told Mr Deely had a chance encounter with this man, and most likely one other person, on the street.

They have been told a dispute ensued during which a gun was produced and Mr Deely was fatally wounded. Gardaí have also been told by a witness who has now come forward that Mr Deely’s body was then taken in panic to the site in Chapelizod now being searched.

The criminal source has claimed the body was effectively hidden there in panic to conceal the crime.

The location of the remains is specific and it is also the only piece of information the Garda has that can be fully tested.

Because the intelligence relating to the claimed location of the remains appears to be of highest value of the information being probed by the Garda, no resource is being spared in pursuing it.

In April gardaí published enhanced CCTV images showing him conversing with an unidentified man during his last known movements.

Mr Deely then enters the offices, and has a coffee inside with a colleague. He emerges 37 minutes later with an umbrella. He leaves the umbrella against a wall, buttons up his coat, and begins walking towards Baggot Street Bridge and shortly after that he is last recorded on Haddington Rd CCTV.

The search currently under way for Mr Deely’s remains is the most significant development in the case since his disappearance 16½ years ago.

Garda sources said that while the information they have received seems credible, it was unknown whether the search will prove successful, though they are optimistic.