Gardaí have used Tasers 125 times in past five years 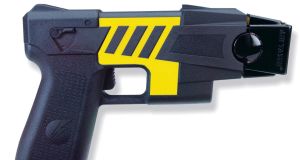 Gardaí have used Tasers on 125 occasions in the past five years, including in a significant number of cases involving severely mentally ill suspects.

They have also fired rubber bullet-like weapons on 12 occasions within the same period, with all of those incidents occurring in the past 2½ years.

Official Garda reports, along with figures obtained by The Irish Times through Freedom of Information requests show an increasing trend of using “less-than-lethal” weapons against suspects wielding knives or other non-firearm weapons who either pose a threat to themselves or others.

These weapons are available only to specialist units such as the Emergency Response Unit, the Armed Support Units and the Special Detective Unit, although consideration is being given to arming all frontline gardaí with Tasers.

The figures suggest mental health crises are a factor in a significant number of Taser incidents. A Taser is an electroshock weapon that aims to incapacitate a person temporarily.

According to reports received by the Garda Síochána Ombudsman Commission (Gsoc), which assesses all uses of less-than-lethal weapons, since 2016 there have been 13 incidents where a Taser was used by gardaí on a suspect who was self-harming. In one incident a suspect was described as “stripped to the waist and covered in blood” when he was shot with a Taser.

The figures for self-harm incidents are likely to be much higher, as gardaí are not obliged to report self-inflicted injuries to Gsoc.

Gardaí are required to report Taser use to Gsoc within 48 hours. However, this rule is often ignored. In 37 per cent of Taser incidents in the past five years, Gsoc was not notified within the required period.

Another less-than-lethal device that is seeing a significant increase in usage is the 40mm launcher, which fires a large sponge-tipped “impact round” to temporarily disable or distract an armed suspect.

The weapon is typically deployed against knife-wielding assailants and is not recommended for suspects armed with firearms.

Sponge rounds are considered much safer than the notorious rubber bullet projectiles deployed by the British army during the Troubles but they have been known to cause injury and even allegedly death if fired at close range.

Several people were seriously injured by sponge rounds during the Black Lives Matter protests in the US in recent months.

However. none of the incidents involving Garda use of the weapon resulted in significant injury, according to the data.

“These don’t put people on their back but they might give them a sore leg,” said Chief Supt Brian Sutton, who heads the Garda Special Tactics and Operations Command.

“They open up other tactical options for you. I might fire the 40mm while I’ve three guys behind me with a shield and they would then rush in. You could nearly call it a distraction device.”

Less-well-known devices deployed by specialist gardaí since 2016 include flashbangs – stun grenades that emit a blinding flash of light. According to reports to Gsoc, these were used twice.

However, their actual use is thought to be higher as many gardaí do not consider them a weapon, meaning their use does not have to be reported to Gsoc. For example, the use of a flashbang by the Emergency Response Unit during a raid on an inner-city Dublin flat, in an incident that was caught on video, does not appear among the Gsoc notifications.

Other weapons include the M21 Aerosol Projector – essentially a large version of the standard Garda pepper spray – and the beanbag round, which is fired from a shotgun and serves a similar purpose to the 40mm foam round. Each of these were used once, according to the data.